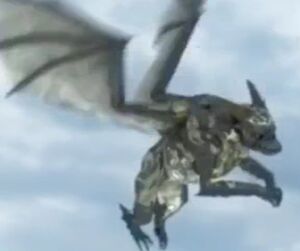 The Largas (a name given to them by the Russians) are a non-sapient species of large, dragon-like aliens, originally found on the planet Mars. Three members of this species would later find their way to Earth as spores trapped inside meteorites.

Adult Largas are winged reptilian-like quadrupeds with six limbs in total - two pairs of legs and one of membranous wings. They're capable of shooting energy discharges from their mouths, which can annihilate aerial vehicles with ease.

These creatures begin life as microscopic spores, which may be found embedded within the structure of Martian meteorites. The spores later develop into a strange liquid which will pour out of the rock and solidify into several worm-like creatures. These in turn will quickly fuse together into a single larva. Even as adults, the Largas are capable of merging together to form a single giant individual. Water has been shown to have a healing effect on them.

Additionally, Largas may develop unique abilities based on the environment they were incubated, e.g.: the one that crashed into a nuclear power plant developed radioactivity.

Largas are also known for having a curious defense mechanism, in which they emit high-frequency soundwaves which provoke severe headaches and nausea on those who observe them. Strangely, despite hailing from the frigid world of Mars, the Largas have been shown to be vulnerable to cold temperatures.

Retrieved from "https://aliens.fandom.com/wiki/Larga?oldid=181801"
Community content is available under CC-BY-SA unless otherwise noted.