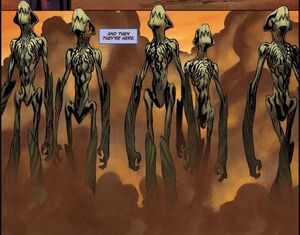 Marko Kloos
Lankies, also called Big Uglies, are a species of gigantic and hostile aliens that began attacking Human colony worlds in 2111, killing their inhabitants and terraforming them into more Lanky-friendly environments.

Lankies are incredibly large creatures, rivaling the largest Earth animals in size and far surpassing them in weight. Lankies average 80 feet (25 m) in height on all fours, with a 30% size variation that can lead to heights between 65 feet (20 m) and 100 feet (30 m). They seem to be denser than Earth animals, weighing a few hundred tons on average, and were originally believed to weigh a thousand metric tons (1,100 short tons) based on incorrect battlefield estimates. In any case, their mass is so great that the earth literally shakes under their steps.

As their name implies, Lankies are quite thin. They are quadrupeds, with very long forelimbs and short hindlimbs ending in three-toed feet. The forelimbs end in four-fingered hands, usually used for walking but also capable of grasping and carrying objects. Their stance is therefore similar to that of Death Angels or the Cloverfield Monster, and they have gaits compared a fruit bat's. The head has no eyes and has a shield-shaped plate on top. This, along with the vaguely beak-shaped mouth, gives the head a vaguely ceratopsian appearance. Their skin is eggshell-white in color and extremely tough, allowing Lankies to shrug off heavy gunfire.

Lankies thrive in atmospheres quite different to that of Earth. Their preferred atmosphere seems to be roughly 80% nitrogen and 20% carbon dioxide, with only trace quantities of oxygen, and at temperatures of over 30 C (86 F). The ratio of carbon dioxide to oxygen in Lanky atmospheres is roughly the reverse of that found on Earth; because of this, Lankies are sometimes referred to as "flipping" the atmosphere of a conquered planet. Despite their preferred conditions, they are able to function in Earth-like atmospheres, even very cold ones, although possibly at reduced ability.

Despite their lack of eyes, Lankies are apparently able to see, as sufficiently advanced visual camouflage appears to work against them. This may be related to their ability to sense radio emissions, which they may use as a version of "sight." They can also hear sounds audible to Humans.

Lanky technology seems to be exclusively biological in nature. Every structure they create appears to be grown from harvested protein rather than built. Whether these structures are truly living organisms has yet to be determined.

Lankies have only been observed to use one type of spacecraft, a vessel called a seed ship. Seed ships are 3 kilometers (1.8 miles) long and weigh millions of tons, making them far larger than any Human spacecraft. Their name comes from their distinctive shape, which resemble both seed pods and bullets. They are jet-black and, for unknown reasons, can only be detected visually; they do not appear on radar or thermal imaging. Seed ships are composed of an unknown but extremely tough biological material, with hulls twenty meters (66 ft) thick, making them so durable that they can withstand multiple nuclear strikes without harm. Lanky seed ships fire massive, sharp biological penetrator rods as space weapons, and bombard planetary surfaces with nerve gas capsules.

Lankies do not use any sort of anti-personnel weapons, possibly because their immense size and strength are usually sufficient. They also have not been observed to use handheld tools.

Lankies first came into contact with humanity in 2111. In that year, they invaded the colony planet of Willoughby, nerve-gassing its small settlements, landing scouts, and beginning to terraform it. The North American Commonwealth, the owners of the colony, only discovered the invasion by chance, but managed to evacuate what remained of the planet's population before the Lankies took the planet. When the news made it back to Earth, the NAC's rivals, the Sino-Russian Alliance, maintained that the Lankies were a hoax until one of their own planets fell to the aliens in 2112, resulting in the loss of 130,000 lives.

Over the next five years, the Lankies pushed increasingly close to Earth, as the NAC and SRA continued their colonial wars. Fighting between the two factions continued until a fleet of Lanky seed ships arrived in the Sol System itself in 2116. The Lanky fleet attacked and invaded Mars, decimating the NAC and SRA fleets defending the planet. They also gassed the planet's cities, killing some 25 million people, and destroyed most of the civilian vessels that attempted to escape. They then terraformed Mars for Lanky settlement, killing what life remained and undoing the decades of Human terraforming there. Finally, the Lankies blockaded the Sol System's transition point, preventing FTL travel to and from the system and cutting off Earth from all of its colonies.

A Lanky ship pursuing a fleeing SRA vessel arrived in the Fomalhaut system not long after, which caught the attention of NAC forces stationed on the colony of New Svalbard. While the SRA ship was destroyed, the NAC forces rammed an unmanned but heavily loaded freighter into the Lanky vessel at 0.1 c, marking the first Human victory against a Lanky seed ship. Prior to its destruction, the seed ship deployed troops to an SRA colony in the system, but without space support these forces were wiped out by a joint NAC-SRA effort.

The blockade of Sol left supplies unable to reach New Svalbard, threatening its people with starvation during their world's harsh winter. This desperate situation forced the NAC and SRA forces in Fomalhaut to evacuate most of the colony back to Earth during a risky blockade run. The convoy's escort engaged a Lanky seed ship after emerging in the Sol System, resulting in the loss of three escort ships. The convoy reached Earth before realizing that the Lanky seed ship had followed them there, resulting in another battle. The Lanky seed ship was damaged when an NAC ship rammed it, and subsequently destroyed by heavy fire to the damaged area. The dying ship launched landing pods at several urban areas before its destruction, and the Lanky scout-settlers aboard began attacking these areas. Ground and air forces killed the invaders, but at the cost of hundreds of soldiers and thousands of civilians.

A later incursion resulted in a group of Lankies landing in Greenland. Most of the Lankies were killed on arrival, but some were able to flee and establish a base beneath the ice sheet. This base was used to begin terraforming efforts, but was discovered and destroyed by NAC forces before the effects could expand beyond a pocket under the ice.

An NAC-SRA coalition retook Mars after approximately one year of Lanky occupation. By this time, the only remaining Humans on the planet were hiding in airtight shelters; they were evacuated during the operation. The Lankies already on the surface were killed and the seed ships growing beneath the surface were destroyed, but Mars remained uninhabitable to Humans. The reconquest of Mars also revealed that the people killed during the invasion had been used as building material for Lanky settlements and seed ships.

After this, the Lankies were driven from the Solar System, but remained a threat. They were last seen conquering New Svalbard.

Retrieved from "https://aliens.fandom.com/wiki/Lanky?oldid=185509"
Community content is available under CC-BY-SA unless otherwise noted.