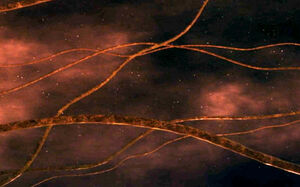 The Lankin is a sentient vine-like alien creature or creatures that feed off the grief of their victims by shape-shifting into the person their victims are grieving for.

It is unknown if the Lankin is a single entity or a species, but what is known about them is that they resemble long, fleshy vines that, when shape-shifted into a person, look like the said person but with a Lankin vine protruding from the back.

The Lankin feast off of the grief of other sentient beings. To find food, the Lankin grows vines that venture throughout a populated area, like a town or neighborhood. As they close in on their prey, the Lankin uses telepathy to know who their victims grieve about the most. They then wait until their victims are alone and grow other seperate vines to entangle around anyone the victims know that could interfere with their hunting and make them comatose. After all that, a Lankin vine enters the same room their victim is in and shape-shifts the tip of the vine into the people their victims grieve about. The Lankin can't consume their prey without adding grief to the prey and once they touch the Lankin impersonating the lost loved ones, the Lankin grabs hold of their prey and yanks the vine holding their prey into the collection of Lankin vines to be consumed. To persuade their prey into coming close enough to be consumed, and to explain the vine on their back and other questions from their prey, the Lankin (acting as the dead people grieved by their prey) says that the Lankin allowed them to speak with the living and wish for those grieving them to come with them to a heaven like world. What ever doubt the prey may have is avoided by using telepathy to exhibit specific traits like personality and interests known about said loved one in the memory of the prey.

The only known weakness of the Lankin is that while they feast on grief from their prey, emotions like spite, hatred or anger act like poison to the Lankin and often leads them to retract the various Lankin vines it or they chose to spread through out the specific hunting spot (city, town, neighborhood).

Retrieved from "https://aliens.fandom.com/wiki/Lankin?oldid=163940"
Community content is available under CC-BY-SA unless otherwise noted.