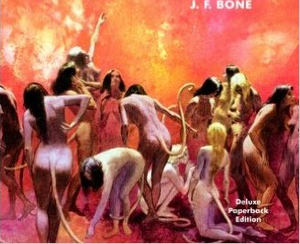 The Lani are a tailed humanoid race from Kardon in the novel Lani People by Jesse Franklin Bone.

The Lani were indigenous to the island of the Flora on Kardon. They were descendants of a pair of missionaries Alfred and Melissa that crash landed on Kardon thousands of years ago. Their crash damaged their ship causing a radiation leak, forcing them to stay away from the area. The pair eventually had children, but due to the proximity of the radiation and coupled with generations of inbreeding their descendants developed tails and became a separate species from humanity called the Lani.

The Lani grew in numbers and power, but they split into two warring groups over the theological point of whether Ulf(Alfred) or Lyssa(Melissa) was the principal deity.

Roga the Foolish opened Lyssa's tower, which was possible a communication tower that his progenitors tried to use to call for help. He wanted to find out whether the Ulfians or Lyssans were right, and brought the Black Years to Flora, these years coincided with Man Alexander, discovering their world and claiming it in the name of the Brotherhood of Man.

Four hundred years later, the Alexander family still exerts their control over the Lani using them as livestock in farming Flora. The entire male species were condemned into captivity, their sperm harvest to be used to impregnate female Lani so that they could breed. The conditions in which the males live are less than humane and unsanitary. The staff encourages the males to fight to the death for sport. Thus many of the adult males face many psychological and mental conditions due to their environment and upbringing.

The female Lani are told that all the males were killed and that there is a special procedure that enables them to artificial inseminate them without the male’s sperm. However this is only a ruse to prevent the females from rebelling and freeing the captive males.

In comparison the female Lani are allowed to live in luxury compared to their male counterparts. The females, due to their alluring appearances as attractive human women, were bred for colour and docility serving as pets to the Alexanders. Those that pleased them had their tailed surgically removed to appear more human. The females served them as servant and sexual play things for many of the male family members and the staff.

When a Betan veterinarian, Jac Kennon, arrived to take the place of a deceased doctor, he befriended a Lani woman, Copper. He eventually fell in love with her and saw her as a person rather than an animal. After learning and discovering evidence of the Lani’s human origins, Kennon was determined to bring this to the proper authorities in the Brotherhood. In order to prove that the Lani were of human stock, they needed to be able to breed with humans, however due to their mutations breeding with baseline humans was impossible. Kennon a Betan, an offshoot species was able to prove that the Lani and humans were the same species, but successfully impregnated Copper proving the Lani were of a common ancestor.

Knowing that the Alexander family would not allow this information of their act of slavery be made public to the Brotherhood, he smuggled himself and Copper off planet arriving on his homeworld Beta, where he informed the proper authorities of the crimes of the Alexander family. The Alexander family in turn were stripped of their ownership rights of Kardon and exiled to another backwater world to restart their fortunes, however before leaving the patriarch of the family transferred ownership rights to Kennon as he violated the terms of his contract by leaving Kardon. Thus Kennon was now the leader of the Lani and incharge of its reconstruction.

The Lani were a proud race that ruled Flora as its masters. They have a rich oral history called the redes, which are orated by a position in Lani society called a preceptess, who act as guardians of the Lani traditions.

Despite the Alexander family attempts to suppress the Lani’s heritage, Lani mothers still maintain these ancient stories to their daughters. The redes are their history, so that future generations of Lani may learn it to remember that they were once a great race -- and that they may be again. According the legend, there will come a male that will free their race from the humans.

In the Lani version of creation, of the first man and woman, who were cast out of Heaven for loving each other despite the Master's objection, of how they came to Flora and founded the race of the Lani. However the progenitors of the Lani were Ulf and Lyssa, a male and female Lani respectively.

Retrieved from "https://aliens.fandom.com/wiki/Lani?oldid=164630"
Community content is available under CC-BY-SA unless otherwise noted.