Alien Species
Register
Don't have an account?
Sign In
Advertisement
in: The Dark Crystal Universe, Thra Wildlife, Herbivores,
and 9 more 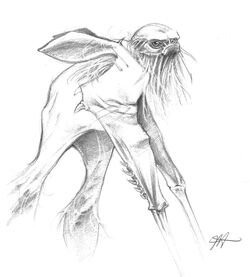 The Dark Crystal
Landstriders are one of the most gentle species on Thra. They are very tall, reaching up to a height of 20 feet (~ 6 meters) as adults; juveniles being around 10 feet (~ 3 meters) tall. They can run extremely fast due to their long legs. They have tooth-like projections running down the upper forelimbs that are used for defense. They have thick whisker-like projections on their faces, and some strange projections that resemble rabbit ears that appear to be extensions of the scapula. The purpose for these extensions is unknown, but due to the speed at which they run, they may be used as vertical "spoilers".

When the Landstriders fight other beings, they unleash a stinger-like appendage from their mouths. The creatures then whip their head around, sending their stingers flying. They then send a jolt of electricity through their stinger, either stunning or killing their opponent. They may also use their long legs as clubs.

Lanstriders were often domesticated and employed as mounts by the Gelflings.