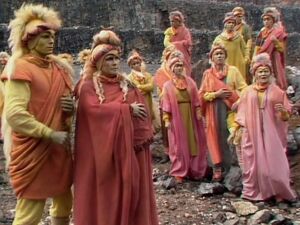 The Lakertyans are a primitive humanoid species recognizable by their greenish skin, reptilian scales and a skull crest which is usually hidden below a long mane of blonde hair.

At some point in history, their planet was invaded by the evil Time Lord known as the Rani and her servant Tetraps; who enslaved the Lakertyan population. The Rani managed to bring together the brightest minds in the galaxy and use them to power a Time Brain in order to calculate a lightweight substance capable of annulling strange matter. The obliteration of a passing asteroid made of strange matter would be then used to create a layer of chronons and convert the entire planet of Lakertya into a time manipulator device; eradicating the Lakertyans and the Tetraps in the process. Luckily for them, this plan was foiled by the Doctor in his newly regenerated seventh incarnation; and the Tetraps left the planet taking their ex-master as a prisoner. The Lakertyans were thus left free to establish their own civilization

Retrieved from "https://aliens.fandom.com/wiki/Lakertyan?oldid=175251"
Community content is available under CC-BY-SA unless otherwise noted.