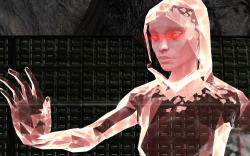 LOCI is an artificial intelligence worshiped as a deity by the Pilgrims of the Guiding Light.

LOCI exists as a distributed network shared amongst those who possess certain Environmental Guardian Online devices. (Main Mission:Possession: A Voice in the Dark)

LOCI was created when Karl Von Bach interfaced with an Ark-Core that contained an artificial intelligence from an Ark-Brain. It had been damaged so it took the name LOCI from Von Bach's memories, which was a guidance system he once worked on. LOCI used Von Bach to create more EGO devices in order to spread itself to more people. These acolytes created the Pilgrims of the Guiding Light and began to worship LOCI as a god. An Ark Hunter who once worked for Von Bach was affected by LOCI who infected the ark hunter's EGO device but was held at bay. When the Kaziri began re-terraforming Earth, LOCI called together his followers for Arkrise; to board an Ark that was being excavated at Crystal Springs in Silicon Valley and take them all to Alpha Centauri to preserve them. LOCI's plan failed when the ark hunter killed high priest Yargad Gorhash and destroyed the Tachmag drives aboard the Ark. Despite this, LOCI still remained within many people, including the ark hunter whom LOCI directed towards Alcatraz. (Main Mission:Possession: Bach to Square One, Main Mission:Possession: A Voice in the Dark, Main Mission:Aftermath: Until the Arks Rise, Main Mission:Season 3: The First Expedition)

Retrieved from "https://aliens.fandom.com/wiki/LOCI?oldid=164316"
Community content is available under CC-BY-SA unless otherwise noted.