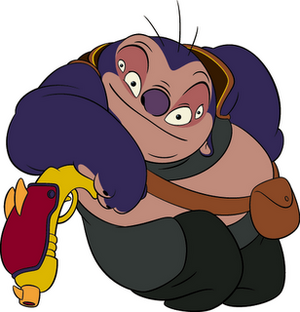 Lilo & Stitch
Kweltikwans are a sapient species of roundly-built humanoids. They are mostly purple-skinned with tan undertones, dark pink skin on their chest and stomach and under their arms - however shades of colors can vary. They have a rather large head, a wide mouth with large blunt-edged fangs, a little purple koala-like nose, four yellow eyes and thick limbs.

Kweltikwans are prone to weight gain due to shortage of food on Quelté Quan and these effects are heightened on the planet Earth due to the gravity being lower than on Quelté Quan. They have evolved into a spacefaring civilization which, as of the twentieth century, was member of a Galactic Federation.

They have formidable strength and durability, being able to withstand undamaged small plasma explosions, and are able to hold their breath for impressive amounts of time. On average, Kweltikwans are among the best in the galaxy when it comes to intelligence, but some specimens are known to be exceptionally intelligent (like doctor Jumba Jookiba).

Retrieved from "https://aliens.fandom.com/wiki/Kweltikwan?oldid=199474"
Community content is available under CC-BY-SA unless otherwise noted.