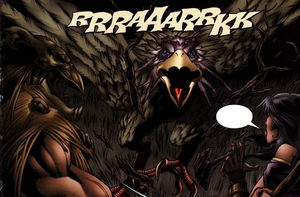 The Kungu Bird is a creature native to the Shaman Lands on the planet Ciress in CrossGen Comics.

In the bush, the Kungu lays its eggs in the nests of other birds, who accept and rear the kungu chick. But the kungu chick denies the others their food. One by one it kicks its sister out of their own nest.

Retrieved from "https://aliens.fandom.com/wiki/Kungu_Bird?oldid=181800"
Community content is available under CC-BY-SA unless otherwise noted.