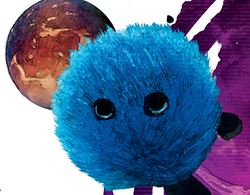 Marcin Mortka
An unnamed species with telepathic abilities from the Milky Way Galaxy that is almost extinct.

They are spherical creatures without limbs that move by flying. Their entire bodies are covered in gray fur. This species have developed telepathic abilities.

This unnamed species was a peaceful race that din't know aggression. They almost have become almost after united Trytolian clans tried to destroy them, because of their telepathic abilities. After that, only a few members of this species had survived and scattered around the galaxy.

In 2013, an individual with a name unspeakable for Humans, called by them as Kulka (from Polish: ball) arrived in the Sol System during the Trytolian invasion to help Humans in that war.

Species on cover of first edition of book Zagubieni. Inwazja.
Add a photo to this gallery
Retrieved from "https://aliens.fandom.com/wiki/Kulka%27s_species?oldid=181359"
Community content is available under CC-BY-SA unless otherwise noted.