Krystalak is a crystalline daikaiju that appeared in the video game Godzilla: Unleashed.

Like his 'brother' Obsidius, Krystalak is a monster brought to life by SpaceGodzilla's alien crystals. However, unlike Obsidius - who is a hybrid of the alien crystals' energy and the ferrous materials of Earth's lithosphere - Krystalak is spawned by SpaceGodzilla's crystals and their energies alone, making him a creature purely of extraterrestrial descent, despite being born on Earth.

Krystalak is a flat-snouted crystalline organism with purple crystals covering his body, including his chin, which gives the impression of him having a beard. However, he does have areas of white skin on his arms, legs and upper body where the crystals aren't present.

When SpaceGodzilla sent his crystals to Earth from the dimension in which he was imprisoned, the crystals began to overrun the cities of the world and have dramatic effects on the environment.

In New York, Krystalak began to grow from the alien crystals and their energies, becoming a semi-sentient creature. Eventually, the monster arose and revealed itself to the world. Due to having been born from the energies of the crystals, Krystalak's main focus is to accumulate all their various energies and become the ultimate monster. Despite being an alien creature, Krystalak is not an ally of the Vortaak and only seeks power for himself at any cost.

Krystalak is a ferocious monster with high speed and agility. Due to having been born from the alien crystals, he is quite resistant to most forms of energy weapons, which forces opponents to fight him at short range. He also possesses several attacks relating to the crystal energies, including firing a solid stream of crystal shards from his mouth and releasing energy blasts from his tail. Krystalak's most powerful attack is the ability to overload the crystal heart on his chest, unleashing a shockwave that will badly damage all of those around him, but sacrificing his own physical integrity as a result. 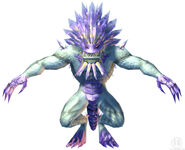 Retrieved from "https://aliens.fandom.com/wiki/Krystalak?oldid=125591"
Community content is available under CC-BY-SA unless otherwise noted.