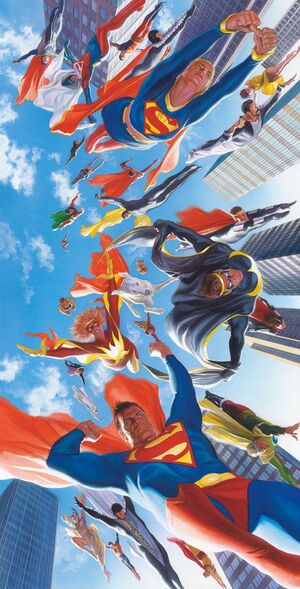 DC Comics
The Kryptonians are a critically endangered humanoid species from the now destroyed planet Krypton. Superman and Supergirl are the last of the Kryptonians. They are the natural enemies of the Dheronian species as every 20 years they were at war for each other's treasures.[1]

Kryptonians are indistinguishable from humans but have their greater height and muscle builds (this can be explained as an extreme example of convergent evolution). The Kryptonian has the same likeness as humans, the Kryptonian are segregated culture is divided by six guilds: Leadership (the High Council) Scientific (medical and engineering), Arts (design and construction), Warrior (security and weapons), Worker (services and general assistance) and Religious (discipline and ordinance). Their guild is chosen for them on the teenager by choice, and learn how to differentiate the choices of the guilds not mixing the other guilds for service, without interfering with the different guilds of their parents. The guilds were founded after the chaos of war policy by the High Council (global collective advice) about thousand years ago before the end of Krypton. Before the order of the internal insulation of the planet Krypton illness started in advanced technology as galactic explorers studying other technologies for improvement.

About a thousand years before the end of Krypton, with advanced progessive technologies, but with the invasion of the ancient alien enemies "The Vrangs" a war that lasted 3 years, with countless loss of life, The Kryptonian culture began to change to be isolated out all beings from the planet Krypton, there were internal conflicts between the policy of exploitation galactica with a new order of the high Council in the internal collective power of the planet, the new order won, and the whole policy of exploitation was excluded, separating some rebels against the new policy Kryptonian, half of the rebellion came out of krypton to found the world Daxam, and the other half that was, started a war. In the hunt for a few rebels to death, a nuclear bomb hit the core of the planet, condemning krypton slowly to death. The chemistry of the nucleus became the birth of kryptonite, creating storms, earthquakes and temperature drop messing with the axis of the planet, increased substance of kryptonite to the planet created poisonous gases killing slowly the Kryptonian life. The high council supported and promised benefit Kryptonian population, to look for ways to save Krypton in search of the best scientists, the people supported the High Council, which became the only Kryptonian world government, founding a new era with the division of the 6 guilds. During a visit of a space priest called the "Cleric" from his space ark, seeking new disciples for its eradication, a group of 30 Kryptonian followed the Cleric in their new space journeys, the group began to die one by one mysteriously, the cleric used his alien artifact collected all the genomes of Kryptonian dead, and discovered by studying a chemical atmospheric modified the genome of Kryptonian to ban them come out once the planet, doomed to be forever trapped and connected to the doomed planet Krypton the Cleric back to Krypton, delivering their dead and announced before the high council the final conviction of the Kryptonian people, after leaving Krypton, the Cleric kept the genome of the dead within the artifact known as eradicator, a search for a cure, years later, the Cleric finds the cure,  which was announced in future by Kal-El, to find the Cleric, during his exile into space. In the last Kryptonian was, there were several events a "new alien invasion" known as Brainiac, who robbed the city of Kandor, the most important of Krypton, the discovery of the Phantom Zone by Jor-El, he also found the condemnation of Krypton, the high council expelled Jor-El for lies and terrorism Kryptonian population of the few who believed, were the inhabitants of Argo City, who built a power dome (providing light and oxygen) keeping the surviving population, Commitment, the core of the krypton was at the end, creating a strong pressure that the planet exploded into fragments. The Kryptonian are not friendly with primitive cultures (for the Earth), they prefer to isolate as scouts to study in their spatial networks.

In Kryptonian mythology, Vohc was a great God who created the Rao brothers and Cythonna to help in the creation and birth of Krypton. Vohc joined the genetics of the two brothers to create a new race, and gave his technological knowledge to evolve and create Cythonna chose the dark side of evil, killing its creator and father, Rao creates a war bond with Cythonna, defeated, Cythonna was divided into three parts becoming the three moons of krypton. Rao promising not to abandon the creation of his father, becomes a big star, and all Kryptonian worship Rao as the supreme God of the planet on the Raonist religion, intellectual adopting Vohc made the Kryptonian race to be quite advanced in their technologies.

The Kryptonian had two alien races as occasional enemies as Dheronian (alien neighbors two dwarf stars that change color) and  the Vrangs (known as invading pirates and torturers of slaves), in a system near the Kryptonian space.

About 55.76 million kilometers from Krypton, there is a spatial anomaly of two wormholes, one of it was destroyed by General Zod by the giant missile, which Caused the destruction to Rinoti planet que was on the other side of the wormhole, birthplace of Amalak, closed forever the wormhole. The other was discovered by Jor-EL of the dead and changed dimension, founding the Kryptonian jail called "Phantom Zone", Jor-EL create a portal linking to this dimension. Amalak translates the symbols of missile debris found wandering in the orbit of Rinoti, originated from the planet Krypton, starting a war with the Kryptonian for revenge.

Besides Superman (Kal-El) as surviving almost extinct Kryptonian race, others like Supergirl (Kara Zor-El) and the inhabitants of the bottled city of Kandor, are officially the survivors of Krypton.

The genome Kryptonian and differential at any yellow star, creating changes and vulnerable as immortal power of a god. Kryptonians, once outside their star system, acquire new abilities determined by the frequency of each sun's light and internal radiation. White stars, orange stars, dwarf stars, giant stars and blue stars all give them different properties. Their cells are natural organic solar batteries that absorb and metabolize solar energy, giving them their various abilities.

Kryptonians of Earth-3 are known to possess all the same powers and abilities as their prime counterparts. There is however an exception, that being that their powers come from absorbing the energy from Kryptonite fragments. The only known Kryptonian to do this is Ultraman, being that he is the only known Kryptonian of his Earth to have survived the destruction of his Krypton. He doesn't absorb the radiation it gives off, instead he ingests it, whether it be crushed into a powder he snorts like a drug or through flat out eating it.

According to some rumors, Ultraman was strong enough to kill gods of his Earth, as well as possess more resilience to magic than that of Superman. He was capable of taking a direct hit from Black Adam's power of Shazam with no other after effects, with the exception of it causing him to bleed.

Kryptonian technology and architecture was mostly based on giant self-grown crystals, known as "Sunstone Crystals", which were very common on their planet and could be used to store information. These structures might have been natural or artificial, or a combination of both. Kryptonian technology was so advanced, that they had the potential to download inscriptions (including all of their knowledge) onto the very electrons of their ships and metals, which would in turn download into the cerebral cortex of any said creature. Superman's ship is the last of Krypton's technology. In the DC Extended Universe however, their technology is based on an amorphous material known as "Liquid Geo". It is as multi-purpose as Sunstone and is able of creating various things, including communications, weaponry, command keys, etc.

On Earth-10, Kal-L's ship came with a unique, yet limited supply of a chemical. This was used by his wife Lena Kant for the duration of their marriage. This chemical was capable of maintaining her youth, so long as she used it constantly. Kryptonians are also known to have clothes made of extremely tough fibers. The material these fibers are made up of is unknown and has been shown to be as durable as the Kryptonian wearing them. In the Max Fleischer cartoon, Superman has demonstrated the ability to actually protect Lois Lane from molten steel with his cape, without any kind of damage to it. Beings like Doomsday and Darkseid however have been able to damage the fibers making up their uniforms. In the DC Extended Universe, the tight bodysuit worn by the Kryptonians are looked to more as an under suit, or a form of long johns worn beneath their armor or robes. Despite this however, the suit can be equipped with a cape, optionally of course.

Since the discovery of the Phantom Zone, there has been a device known as the Phantom Zone Projector, able to create a portal right to the inter-dimensional prison. Superman is known to own one within the Fortress of Solitude. In the DC Extended Universe however, the methods of traveling to the Phantom Zone is known simply as a Phantom Drive, allowing any who possess such a device to leave and enter the zone at will. The Kryptonians of the DC Extended Universe possess highly advanced terraforming technology, enabling them to transform a world like Earth, into one like Krypton.

Kryptonians seem to also have their hand in nanotechnology as well. In Injustice: Gods Among Us, the Superman who resides in the universe after the Joker's death has developed a pill known as 5-U-93-R. The pill consists of Kryptonian nanotechnology, which when ingested, increases the tensile strength of both tissue and bone by several thousand percent. This makes any normal human as durable as the Man of Steel for sometime, however the effects are temporary. It is however dangerous to ingest more than 2 at a time, otherwise people are subject to cardiac issues.

The Kryptonians were a very culturally advanced race; with two primary culture traits: science and warrior-like mentality. The political powers on the planet were governed by a council of scientists and warriors (but mostly scientists). Each noble Kryptonian family (or "House") was symbolized by particular symbols which resemble Earth's Indo-European alphabetical letters (such as "S" for El or "Z" for Zod). The red dwarf star, Rao of Krypton's planetary system was worshiped as a God, but in a more scientific manner than Earth's spiritual religions. Kryptonian Dogs were kept as pets by the Kryptonian people, much like Earth Dogs are kept as pets by Humans.

The Kryptonian people were a very xenophobic race that hardly ever left their homeworld, however they didn't all die out. Though Kal-El and Kara Zor-El were the only 2 on Earth after the destruction of Krypton, a whole colony of Kryptonians in the bottled city of Kandor. Other Kryptonians were found within the inter-dimensional prison, known to many as the Phantom Zone, which included General Dru-Zod, his wife Ursa and the hulking mute known as Non. Though some maintain their xenophobic nature, others like Kal-El and Kara Zor-El are known to be more accepting of other species.

Kryptonians and Superman have a few enemies of note:

Kryptonians had relationships a various forms with many planets across the 28 known inhabited galaxies. 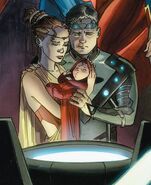 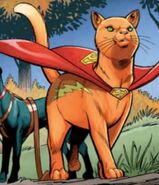 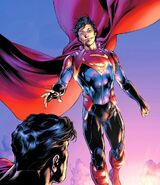 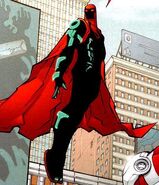 Doomsday
Add a photo to this gallery

Retrieved from "https://aliens.fandom.com/wiki/Kryptonian?oldid=187017"
Community content is available under CC-BY-SA unless otherwise noted.