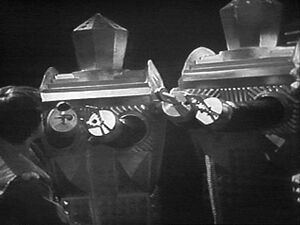 Crystalline creatures, the Krotons also appear to be part robotic and may in fact be a type of cyborg. Masters of advanced technology, the Krotons travel in spacecraft called dynatropes, which are powered by mental energy. Biologically immortal, they can melt down into a slurry liquid state of stasis. They can be killed by an impure form of sulfuric acid, released into their tellurium-based life support system. Krotons prefer dark environments and are unable to see properly in abundant light.

At some point, a Kroton dynatrope crashed on the homeworld of a primitive humanoid species known as the Gonds. For many generations the two surviving Krotons - preserved in their liquid states inside their heavily equipped ship - controlled and restricted the scientific development of the Gonds and were viewed almost as gods by them. Occasionally the Gond considered the most brilliant student was selected by the Krotons to become their "companion" and enter the ship to never come back. As it turns out, the Krotons were actually draining their mental energies to power the dynatrope and subsequently destroying them. When the Doctor arrived on the Gond planet, he witnessed this and revealed the truth to the Gonds, who organized themselves to rebel against their rulers. The two Krotons returned to their solid form but were ultimately killed, leaving the Gonds free.

In one of the alternate universes, where the Daleks were absent, the Krotons became the dominant power of that reality and established the Kroton Imperium. They also were a more "evolved" form of lifeform, able to shapeshift and create weapons. One of its fleets went through a gate via the Void and into N-Space where it did battle with Quarks from an alternate universe where the Quarks were the dominant power. During the battle, they also attempted to capture the Fourth Doctor's TARDIS. Soon both the Quarks and Krotons were attacked by Ogrons from another alternate universe in which the Ogrons were the dominant power. Upon learning from the Doctor of the power of the Daleks in other realities, all three retreated to deal with crisis in their own universes. 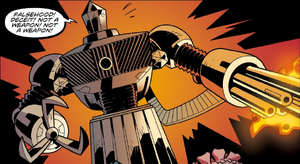 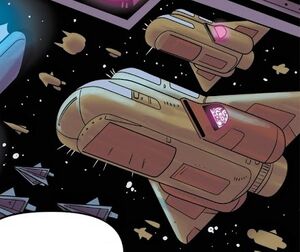 Kroton Imperium ships (The Lost Dimension)
Add a photo to this gallery
Retrieved from "https://aliens.fandom.com/wiki/Kroton?oldid=133226"
Community content is available under CC-BY-SA unless otherwise noted.