"They are fierce indeed these Kroot, and savage. I look upon them and tremble at their ferocity. I can only hope that when the enemy sees them they tremble as I do."
―Por’vre Tau Cho, Water caste envoy. 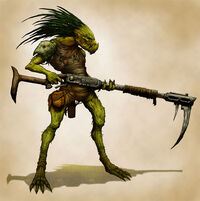 Warhammer 40k
The Kroot are a carnivorous humanoid species that frequently appears throughout the galaxy, native to the world Pech. They are a member species of the Tau Empire, but they also seem to be known mercenaries.

The Kroot belong to the genus "Krootis", common to 90% of the vertebrates species native to their homeworld Pech. Due to the shaping process of the Kroot, and the influence of it on their evolution, the vast majority of the wildlife of Pech appears to have evolved from ancient Kroot who reached evolutionary dead-ends from their diets.

By devouring the flesh of another species, a Kroot may absorb the genetic traits of whatever species the meat came from. For example, a Kroot which extensively eats the flesh of a flying species may grow wings and develop the ability to fly, or one who consumes the flesh of an Ork will develop a increase in muscle mass. Besides the biological traits of those they devour, Kroot may also develop mental attributes such as the culture of sapient species fed on. For example, a Kroot which feeds on the flesh of Dark Eldar may develop a cunning personality and sadistic urges. This evolutionary process of the Kroot also ties into their religious traditions as Kroot are known to devour the bodies of deceased relatives during burial due to their belief that this preserves their spirit in their living kin.

The Kroot worlds have long been a part of the Tau Empire ever since a Tau expeditionary force helped liberate several Kroot enclaves from Ork domination.

Kroot warriors have a strict code of honour, and in return for the support of the Tau empire, supply large numbers of warriors as exlclusive mercenaries. Their self-sufficiency and uparalleled fieldcraft are a major asset to the Tau and a useful contrast to their more technologically dependent masters.

Whilst the Tau find the Kroot's predilection for eating the flesh of vanquished foes barbaric, it is hoped that prolonged exposure to the Tau's sensibilities and culture will eventually purge them of this distasteful habit. Despite this, the Kroot are afforded virtually the same level of respect as a Tau, since their skill at arms is much valued by the less physically able Tau. The Kroot are honoured for their martial prowess and are rewarded for their effors, as befits loyal citizens of the tau empire.

The rank-and-file soldiers of Kroot kindreds and mercenary bands, Carnivore squads are typically comprised of ten to twenty Kroot and one Shaper. While they typically lack any adaptations of shaping, the Shaper leading the squad may direct them to feed on the bodies of fallen enemies to absorb any traits which may grant them an advantage.

Considered the leaders of the Kroot, the Shapers are responsible for directing the Kroot's shaping process, deciding which traits those under their command may take. By the Shapers' authority, the Kroot are prohibited from devouring the flesh of Tyranids due to the harmful mutations which may result, Tau due to their loyalty to the Tau Empire, and Necrons due to the effects of living metal on their bodies.

The Kroot utilise Krootox as beasts of war. They saddle them and mount upon their backs an overlarge version of the Kroot rifle, which is crewed by a single Carnivore rider. The Krootox are large and solid enough to provide a stable and mobile firing platform for the weapon, while at the same time serving as powerful assault troops in close combat. While relatively placid under the control of a Carnivore, the Krootox become enraged by the presence of an enemy and their hugely powerful arms and fists are capable of staving in vehicle hulls and power armour with equal ease.

Knarloc Riders operate in groups of three to six Knarlocs and riders and are often delayed by Knarlocs feasting on the corpses of the prey they have just killed. While not as fast in the open as a Pathfinder team mounted upon its modified Devilfish carrier, the Knarlocs are far better suited for moving through terrain that armoured vehicles would have problems traversing. When moving through forests, jungles and swamps, the Knarlocs are stealthy. When launching an ambush it is common for the riders to dismount, sometimes using their mount as additional concealment or cover. Other Kindreds, generally those in possession of more vicious beasts, utilise them more like heavy cavalry. Knarloc riders equip themselves according to the character of their mount and the tactics they intend to employ against the enemy. Those riding the more aggressive mounts sometimes carry crude spears or lances, while those utilising the more stealthy beasts carry a longer version of the Kroot rifle. Others carry the more common version of the standard fire arm, which, thanks to its muzzle- and stock-mounted blades, makes an effective weapon close up as well at range.

Retrieved from "https://aliens.fandom.com/wiki/Kroot?oldid=200489"
Community content is available under CC-BY-SA unless otherwise noted.