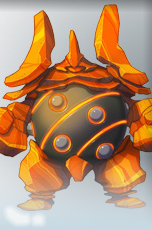 The Kron are a species of silicon-based lifeforms. They were first encountered by Sonic the Hedgehog and his allies when their interdimensional starship the Cyclone crashed on the Kron Colony. They are notable for their odd, Yodaesque dialect, which they maintain is actually a grammatical malfunction on behalf of the listener as opposed to the speaker.

The eldest of the extant species that could be found imprisoned within the Twilight Cage by the entity Argus, the Kron are as powerful as they are stubborn, known mostly for their mining and metallurgical talents. Due to their rock-based biology they require little sustenance and luxury to survive, which is for an extremely long period of time. They also are highly resistant to conventional injury, also due to their nature.

Long ago, the Kron were subdued by the Imperator Ix, an Echidna ruling the Nocturnus Clan. They were then forced to build weaponry and ships for the Nocturnus Clan. Eventually, however, they chose to rebel against their oppressors - it was during this period that Sonic and his allies arrived. At first, the Kron mistook the group for agents of Nocturnus and attacked them. In order to cull the attacks by the beings, Sonic promises to aid the Kron with their uprising as well as with the liberation of the main Kron factory from its Nocturnus occupation. Much to the ultimate relief of the Kron, they succeeded in their efforts, freeing the Kron.

As thanks for Sonic and crew's aid, the Kron choose to outfit the Cyclone with energy-deflecting allows, enabling the crew to break through the Nocturne's forcefields.

Retrieved from "https://aliens.fandom.com/wiki/Kron?oldid=181358"
Community content is available under CC-BY-SA unless otherwise noted.