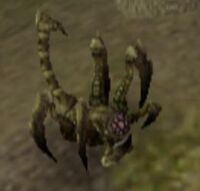 Alien vs. Predator
Krilltic are large scorpion-like creatures native to LV-742. Not much is known about them but they are usually seen around hive-like structures of insects appearing to feed with their claws. They are hostile towards other living beings and will attack on sight.