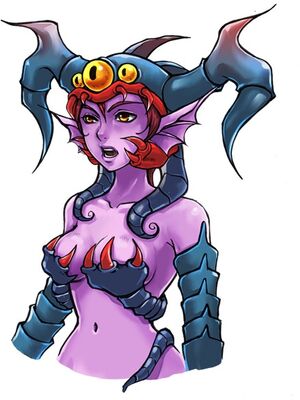 Sigma Star Saga
The Krill are a purple-skinned humanoid race who heavily utilize bio-organic technologies. They are searching for six synchronized planets, and are in a race with humanity for their discovery. They are responsible for the destruction of the Sleeping Flesh which once incubated inside of Earth as well as the release of the one incubating within the Forgotten Planet.

Krill females have two maturation phases; one for themselves and one for their parasites. While the Krill female herself will mature on her own over time, the parasite does not. Instead, the parasite can only mature through a response to romantic feelings. For instance, if a Krill female falls for a male (of any species), she will obtain a growth on her back that will burst if not taken care of. Often, she will faint, and then must enter clean water for the process to safely run its course. Once submerged, the growth will erupt, giving her glittering, golden wings. However, these wings are not kept by her, and it is instead customary for them to be transferred to the parasite of the one she adores.

Krill may sometimes be born as trioplets. These are similar to triplets, yet they function upon the same consciousness, making them in essence one being in three bodies. They are empaths, and are therefore sensitive to feelings. They may also be naturally able to float or hover, although this might have been a trait specifically utilized by the trioplets Folly, Lolly, and Sliss.

The Krill use a number of bio-technologies in their war with the human race. These include but are certainly not limited to symbiotic armor (known as a Krill Parasite) and bio-organic ships. It is highly likely that their starbases are also bio-organic.

"Parasite" is a misnomer, as krill Parasites are actually mutualistc symbiotes (both organisms benefit).

The Krill Parasite is a genetically-engineered organism that attaches itself to its user, enhancing the wearer's natural abilities such as speed and endurance. Each parasite is also the physical link to the various Krill ships, allowing transportation and control of said ships.

The Krill Ships are built in ratios of 100 ships to every 1 pilot. They are also biologically engineered, and are set about to patrol sky ways during investigations. While they can pilot on their own, they panic when they sense danger, and will summon the nearest pilot to them, allowing the pilot to control the ship's actions. An interesting note is that the stronger a pilot's parasite gets, the stronger the ships they enter become. Once a threat has been eliminated, the Krill Ship will automatically beam the pilot back down to where he was last situated and continue on its reconnaissance.

Krill Starbases are notable for actually being capable of landing on planets, not seen in many other sapient races' starbases. Each starbase is built differently, although whether this is a tactical strategy or a personal preference is not known. Krill High Command has ordered six starbases to be constructed and set into orbit above each of the synchronized worlds.