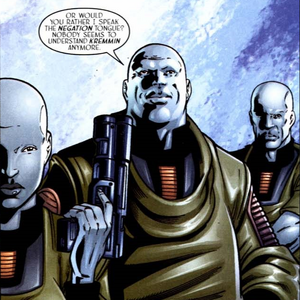 The Kremmin were a species native to the Negation Universe.

The Kremmin were a bald race of blue skinned humanoids.

The Kremmin were the founders of a small prosperous interstellar empire called the Kremmin Continuum. The Continuum reigned for around 1200 seasons, inviting all species with peaceful intentions. However the Kremmin civilization was wiped out with the coming of the Negation Empire seventy four seasons ago.

All that was left of the once great people was a single ship called the Outreach led by Captain Fluxor who fought against the Negation.

The Kremmin were a peaceful species believing in the ideals of peaceful exploration and mutual trade. They apparently worshiped a group known as the Gods Below.

Retrieved from "https://aliens.fandom.com/wiki/Kremmin?oldid=168786"
Community content is available under CC-BY-SA unless otherwise noted.