The Krell are a species of highly advanced amphibians that went extinct approximately 200,000 years ago, they were natives of Altair IV.

The Krell had reached a stage of technological and scientific development so advanced that they were able to construct a vast underground machine with virtually unlimited power; a machine that could turn thoughts into reality and project that reality anywhere on the planet.

Another Krell device that played a prominent role in Dr. Morbius' plans was their plastic educator, a device able to create a three-dimensional visualization of the operator's thoughts while acting directly on the brain to measure intelligence and impart knowledge. Although previously demonstrated fatal to humans, its use by Morbius had boosted his IQ such that he could understand some of the basic science of the Krell (allowing him, for instance, to "tinker together" the amazing Robby the Robot.) When Lt. "Doc" Ostrow tried it he gained the ability to reason out and tell Commander J.J. Adams what had caused the downfall of the Krell – "Monsters from the Id" – but it also caused fatal injury to his brain.

Dr. Morbius, the lone researcher studying the extinct Krell, does not know exactly what happened to them; nor does he know what they looked like. No record of their physical nature has survived except in the form of their characteristic arch; the doorway used to move between rooms. This doorway, much wider at the middle than at the top and bottom, suggests a being of enormous girth.

Morbius has discovered that in a single day and night, over 200,000 years past, the entire Krell race disappeared and in the time since all above-ground evidence of their civilization had disappeared. It is learned that the Krell's 8,000-cubic-mile (33,000 km3) machine was so advanced that it gave physical form and life to their Id. Even for the advanced Krell, this Freudian personality characteristic, although long forgotten, had not been eliminated. When combined with the power of their machine, the unbridled emotions of their Ids were all at once let loose to eradicate the entire Krell race.

The Krell were originally frog-like in nature with two long legs and a big tail. The ramps between the steps were designed to accommodate their dragging tail. (at least according to the filmmakers)

The monster revealed in the ships blaster rays is the "Id Monster", not a Krell. The Id monster is a projection of a human's (Morpheus') subconscious. Morpheus admitted to not knowing what a Krell looked like. 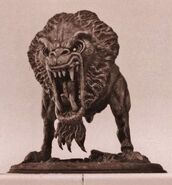 Add a photo to this gallery
Retrieved from "https://aliens.fandom.com/wiki/Krell?oldid=155248"
Community content is available under CC-BY-SA unless otherwise noted.