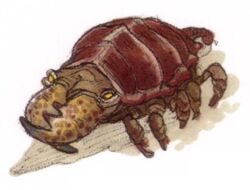 Kreetles are parasitic, burrowing arthropoids indigenous to Tatooine, though they can also be found on the planets Geonosis, Kashyyyk and Naboo as well, often being found within cities, homes, and other urban areas.

The word "kreetle" is sometimes used as an insult.

Kreetles have five pairs of legs, a tough reddish-brown exoskeleton and large mandibles. They are detritivores, often feeding on refuse such as garbage and vegetable-analog remains. Small in size, they can often be found in abandoned Profogg burrows, and they are known for producing young in the form of maggot-like larvae. Even though their species are small, they are aggressive in nature, yet pose little threat to travelers in large cities that they tend to colonize near. However, a breed of Kreetle known as an Overkreetle is an obvious exception to this rule: extremely large in comparison to others of its type, they are capable of killing amateur adventurers in the wilderness. Luckily for travelers however, Overkreetles are rarely found near the proximity of a city.

Despite being native to Tatooine, they can also be found on Naboo, presumably having been brought to the world through stowing away upon ships that departed from Tatooine. Those Kreetles found on Naboo have adapted to share a symbiotic relationship with Slaatik Hagworms within the Lianorm Swamp. The Gungans are known to use Kreetles as nutcrackers, but also can be found enjoying the arthropoid as a snack item as well. It was from Naboo that the Kreetles were accidentally transported to Ohma-D'un.

Probably due to its close proximity to Tatooine, Kreetles are also a common sight on Geonosis; it can be assumed that the Geonosians brought the Kreetles to Kashyyyk before the Battle of Kashyyyk in 19 BBY, facilitating their hold on this planet, as well.