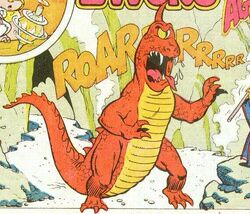 Star Wars
Kreegons were cyclopean predators which once roamed the forests of Endor, however they went extinct long ago due to unknown reasons. Their scaly bodies might have been able to naturally deflect minor attacks from primitive weapons such as spears, although how it would stand up to more sophisticated weaponry such as superheated plasma bursts is unknown. Despite their extinction, a Tulgah sorceress named Morag succeeded in reanimating one to terrorize the Ewoks by replacing its still-existing eye into its skeleton, causing it to become invincible to everything except Morag's own magic.

Size comparison of a Kreegon and the 1 meter tall Ewok, Chief Chirpa.

A Kreegon skeleton.
Community content is available under CC-BY-SA unless otherwise noted.
Advertisement