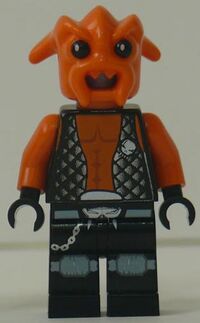 Kranxx is the alien leader of the mighty and influential Black Hole Gang, a group of criminal space bikers. As their leader, he wears the gang's symbol, a skull, as his belt buckle as well as upon his leather vest. Another member of his gang is Rench, is his third cousin.

He is a speed demon, and his preferred methods of law breaking are endangering space citizens by both breaking speed limits and causing serious property damage by blowing up diners, although it is unknown if either of these have ever caused any actual fatalities.

Kranxx has a preference for smaller spacecraft equipped with large thrusters, which hints at his obsession with speed.

As leader of the gang, he commands the likes of Brick Daddy, Craniac, Frenzy, Jawson, the Skull Twins, Slizer, Snake, Squidman, and Squidtron.

Retrieved from "https://aliens.fandom.com/wiki/Kranxx?oldid=185021"
Community content is available under CC-BY-SA unless otherwise noted.