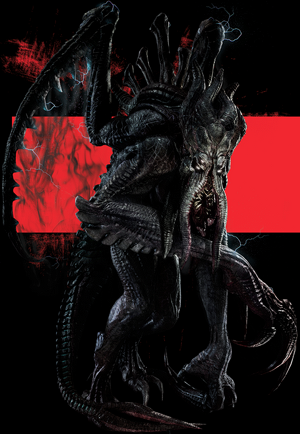 Evolve Universe
Kraken is a large, electrical alien beast that escaped its confines on Shear. Amongst the other monsters, like Goliath, Wraith, and Behemoth, Kraken is specialized in projectile-based weaponry.

Kraken is, to sum it up, a dinosaur Cthulhu - having features relevant to both said creatures. On its back are a set of electric-filled wings, while other parts of its body have tentacles attached. Its head has the most resemblance to the dreaded Cthulhu: tentacle-like barbs covering its mouth, and two sets of glowing eyes. It is also a quadruped, moving on its four giant-clawed feet, which resemble the claws on bats. It also has four horns on its head, another set of tentacles on the side of its head, and a row of bony spines running down its back for further intimidation.

When it comes to electric projectiles, Kraken is the specialist of the monsters. Many of its abilities relate to electrical power in some shape or form. One example is that it can use its two large limbs to form electric-filled wings for flight, and is able to use electricity to lethal effect. Some of the abilities include setting electrical tracking mines on the ground, shooting lightning bolts at prey, and creating a devastating aftershock effect similar to an explosion. Another smaller trick it can do is shoot a concentrated amount of energy to repel foes so it can have more time to get its barring.

Retrieved from "https://aliens.fandom.com/wiki/Kraken_(Evolve)?oldid=194918"
Community content is available under CC-BY-SA unless otherwise noted.