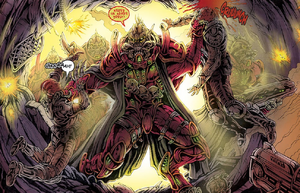 The Krael are an alien race from Stalag-X: Blood War.

The Krael are clawed aliens around seven feet tall able to tear a human with ease. Krael do not experience emotions like humans do, thus they are unable to sympathize. Attached to their lower jaws are tentacles that enable them to merge their minds to another sentient soul and mind allowing them to transfer feelings.

The Krael have been fighting a decade long war with humanity and appear to be on the winning side of the war. However it also appears they are in the middle of fighting another race thus create a two front war.

They are a spacefaring culture, with their technology being almost organic in nature. They are an imperialistic culture, and view other species as weak and as animals. Part of their enslavement of other cultures, involves culling the weak through marches through the wild. They utilize collaborators to facilitate assimilation of other species into their empire.

Retrieved from "https://aliens.fandom.com/wiki/Krael?oldid=181966"
Community content is available under CC-BY-SA unless otherwise noted.