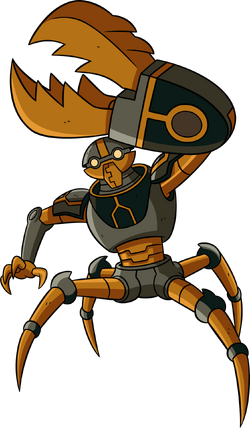 Kraab possesses enhanced strength and durability, and has a large, powerful claw in place of his left hand.

Kraab can use his left hand claw to fire lasers, release gases, and spray a chemical that can neutralize an Ectonurite's invisibility and intangibility.

Kraab possesses thermographic vision, and can turn his head around 360 degrees.

Kraab can retract his head and burrow underground by spinning his lower body like a mining drill.

Kraab is vulnerable to a Galvan interfering with his internal systems, which causes him to lose control of himself and fall into stasis.

Kraab is vulnerable to electricity, such as that generated by a Transylian or Fulmini.

Kraab can be lifted and thrown by a species with as much strength as a Petrosapien.

Kraab can be immobilized by ice, such as a Necrofriggian's ice breath.

Kraab as seen in the original series. 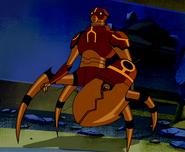 Kraab as seen in Alien Force. 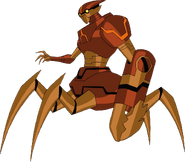 Kraab as seen in Omniverse.
Add a photo to this gallery

Retrieved from "https://aliens.fandom.com/wiki/Kraab?oldid=184498"
Community content is available under CC-BY-SA unless otherwise noted.