Alien Species
Register
Don't have an account?
Sign In
Advertisement
in: Articles that Need to be Rewritten, Star Wars Universe, Semi-Sapient Species,
and 9 more 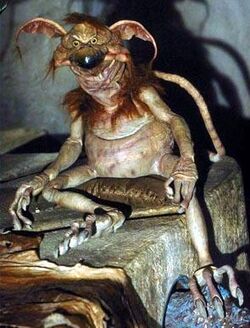 Kowakian monkey-lizards were bipedal reptilian species native to a jungle-like Outer Rim planet called Kowak. Although they had no established culture, Kowakian monkey-lizards were quite intelligent, and despite their silly, cruel nature, they were considered sentient by many sentientologists in the galaxy, although there was much debate over their possible sentience.

Standing roughly seventy centimeters tall, Kowakian monkey-lizards had small, spindly bodies, two large, floppy ears and a beak-like nose, with tufts of thick hair growing around their neck and on the tops of their heads. Some subspecies had long, prehensile tails.

Kowakian monkey-lizards were rarely found off their homeworld, although it was not uncommon to find a monkey-lizard in the service of a crime lord. One such individual was Salacious B. Crumb, a court jester on Tatooine for Hutt gangster Jabba Desilijic Tiure. Crumb perished along with his master when Jabba's sail barge was destroyed in 4 ABY. At least one Force-sensitive monkey-lizard was known to exist—a mutated Dark Jedi named Picaroon C. Boodle, who served under Jerec. Pic was ultimately killed by Rebel agent Kyle Katarn above the Sulon Star.

Kowakian monkey-lizards were reptilian bipeds, with thin, almost twig-like limbs, and a small, triangular head atop slender shoulders. They had two large, floppy ears, which curved backwards and narrowed into a thin, hairy point, and often had several small holes in them, though not always. Some monkey-lizards wore piercings in these ears. In place of a nose, monkey-lizards had a dark colored, extremely wide beak, which could be opened to reveal a large, toothless mouth. In some specimens, this beak was a different color from the rest of the body, even have two shades, such as white and black. They had two wild, yellow eyes, which were usually very close to each other, although this varied. Their skin color was typically a light brown or tan color, though some had red, green, blue, or yellow skin, or even a combination of two of these hues. A particular monkey-lizard might exhibit different-colored markings around the eyes.

Each monkey-lizard had tufts of thick hair growing around their neck, resembling a ruff, on the tops of their heads, and at corners of their jawbones. Some also had a tuft at the tip of the tail. The color of this hair varied: it was usually black or dark brown, though a lighter brown, green, purple, as well as a slightly orange shade were also known to exist. Kowakian monkey-lizards generally had long, thin tails, though some variants of the species had no tail. Immature monkey-lizards were once described by Darth Vectivus as being the "ugliest larvae in the galaxy".

Monkey-lizards resided mainly in large tree nests, and enjoyed swinging through the green rain forests of Kowak. Their diet consisted largely of various insects, worms and small rodents. They ate quite regularly, as their small bodies required much nourishment. They were also scavengers, choosing to eat carrion instead of fresh meat or vegetables. Rotting flesh was quite unhealthy to eat, so many in the galaxy speculated as to why they chose it. It may have been because they preferred to have others do their work, or else because they wished to avoid predatory animals.

Monkey-lizards were extremely destructive and curious, and loved to explore, rarely leaving the packs they moved around in for protection against predators. They often used their ceaseless, loud laughter to scare off any potential attackers. They traveled in groups, making as much noise as possible in an attempt to intimidate other creatures in the jungles. After finding a corpse, monkey-lizards spent time fighting over the food instead of sharing it. Kowakians were known to be extremely cruel and mean-spirited to both other monkey-lizards and to members of other species. They had a clear sense of mischief and humor, and were known to mock others, laugh at them, and even fling objects towards them simply because they found it amusing. They were able to perfectly mimic almost any language, and according to certain studies, communicate in those languages if they wished. Monkey-lizards were also known to laugh at appropriate times during conversations, and could often repeat back what they heard fairly accurately.

The sentience of Kowakian monkey-lizards was a highly debated topic among the greater galactic scientific community. The issue was never officially decided, though many declared them sentient; they believed this as although monkey-lizards were cruel, they were also quite intelligent.

Monkey-lizards had very little culture or structured society to speak of. They had a sort of hierarchical boundary within each group of nests, with the oldest female acting as leader. Each monkey-lizard was given a specific role: some were assigned to gather food, others would maintain the nest, while yet others scouted for predators. Nothing was known about how the monkey-lizards reproduced; in the wild, monkey-lizards usually chased away those who attempted to study them and their behavior, and those in captivity had to be separated from other members of their species due to the noise levels they exhibited when left together. Sentientologists estimated that monkey-lizards laid eggs as a group about once a year, with only a few of the eggs surviving to hatch.

Monkey-lizards played no real part in galactic society; they rarely left their homeworld and were considered too wild to be let loose in proper society. Various scientists had attempted to study them in the wild, but all of these attempts proved fruitless; the monkey-lizards did not take well to being observed. A group of University of Coruscant zoologists once visited Kowak hoping to conduct a study on the planet's spindly inhabitants. The zoologists noted that at first the monkey-lizards were apprehensive towards them, and seemed to be trying to keep to themselves. After about a week of being watched from afar with macrobinoculars, the monkey-lizards began to wander into the group's camp, inspecting their equipment and looking around. The zoologists eventually began to offer the creatures some of their food; that was when the Kowakians's cruel streak emerged. They hid a snake in one of the zoologist's bags, destroyed their expensive equipment, ate all their food, played in their tents and even left barrels of water on top of branches, pouring their contents down on anyone who walked below. The zoologists had no choice but to leave the planet.

Early on in the galaxy's history, Kowakian monkey-lizards were rarely, if ever found offworld. Despite this, they occasionally wandered onto a visiting ship and could end up almost anywhere. Later on, a large number of monkey-lizards could be found in the galactic underworld, often tied to criminal organizations. This was due both to their ability to repeat things exactly as they heard them, as well as the fact that they made excellent spies. Although monkey-lizards were quite popular with some among the upper classes, who kept them as pets for their own amusement, they were usually frowned upon in civilized society; likely because it was impossible to train a monkey-lizard, regardless of the time and effort expended on the attempt, or even the method used. Monkey-lizards bought as pets were usually sold on after their owners realized that they couldn't control them. Their owners often complained of how they had a tendency to smash valuable items, deface art and furniture, and rummage through garbage compactors. Most people thought monkey-lizards were extremely obnoxious, and it was considered an insult to call someone a Kowakian monkey-lizard. Monkey-lizards who were taken as pets became extremely lazy, and they usually starved if returned to the wild. In very rare cases, a monkey-lizard served as a mechanic or engineer; one such being once repaired Boba Fett's armor at a workshop in Ma'ar Shaddam. He was later killed by Risso Nu. A Kowakian monkey-lizard also served as a companion of the famous pirate known as Reginald Barkbone, and another was known to occupy StarForge Station. The monkey-lizard Gibberous Crumb was raised by a Hutt, but was abandoned by its master and entered the care of the Oblee crime lord Nirama, who considered Crumb to be an annoyance. During the Clone Wars, monkey-lizards named Pilf Mukmuk and Muk Muk monkey were part of a gang of pirates led by the Weequay Hondo Ohnaka. This latter pet accompanied Ohnaka to the planet Felucia on a mission to rob the local farmers of their valuable Nysillin crops. When Ohnaka met resistance from the locals and their Jedi and bounty hunter allies, Muk Muk monkey helped the pirate fight Anakin Skywalker by manning the WLO-5 speeder tank Skywalker and Ohnaka were standing on as they fought. The monkey-lizard's shots managed to kill the bounty hunter Rumi Paramita, but Skywalker was able to hold off the pirates until they escaped. Ohnaka's gang sometimes staged fights between their pet monkey-lizards at their base on Florrum.

Also during the Clone Wars, Togruta Padawan Ahsoka Tano encountered a monkey-lizard named Muk Muk Monkey, who was accompanied by a pair of Weequay outside a bar in Coruscant's slum district G17.

Salacious B. Crumbwas a Kowakian monkey-lizard from Kowak itself who served as Jabba Desilijic Tiure's court jester at his desert palace on the Outer Rim world of Tatooine. Although he spoke in laughs and cackles, Crumb was in fact intelligent; his silly nature was something of a facade, and he was smart enough to survive in Jabba's Palace. Crumb came to be in Jabba's possession after he sneaked onto the Hutt's ship and attempted to steal his food. Jabba was amused by the tiny creature, and allowed him to live on the condition that Crumb had to make the Hutt laugh once a day. Crumb stayed in the Hutt's citadel for over four years, creating havoc and becoming one of the most disliked members of Jabba's court. During his time there, Salacious liked to play jokes on visitors and court members; one example of these jokes was when Crumb led two professors into the rancor pit. Crumb was present when Jedi Knight Luke Skywalker arrived in Jabba's Palace to negotiate the release of carbonite-encased Han Solo with the crime lord. The monkey-lizard was on board the Khetanna when it exploded and died as the ship exploded during Skywalker's escape.

Picaroon C. Boodle, or Pic for short, was the only known Force-sensitive monkey-lizard. Early in his life, he traveled the galaxy with a smuggler named Az-Iban; however, sometime during the reign of Emperor Palpatine he was quarantined on Eriadu after being suspected of suffering from Cyborrean rabies. He eventually came into Imperial custody, and because of his Force-sensitivity, he was used as a research subject by Imperial scientist Tuzin Gast. Pic, as well as a Gamorrean named Gorc, was a subject in the experimental Project Chubar. Eventually, the two creatures were transferred to the service of Dark Jedi Cronal, who wanted two Force-sensitive "animals" to run tests on. Cronal used Sith alchemy on the two "animals," until they became mutated Sithspawn, sharing each other's genes and personality, as well as having a link in the Force. The two mutants worked well as a team, and developed a friendship of sorts, with Pic looking out for the dim-witted Gorc's safety. The two joined Jerec's group of Seven Dark Jedi, who aimed to discover the lost Valley of the Jedi. Kyle Katarn foiled the group's plans, killing Gorc aboard the Sulon Star. Pic was devastated by this, and attacked Katarn with his Sith dagger in a frenzy, before having his head bashed in by the Jedi.