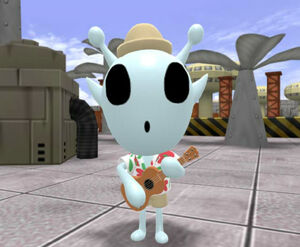 Ribbitking
Kosmo is a gray alien creature found within the Planet Hypnotron in the game "Ribbitking".

Kosmo is a pale blue alien with two antennae, pointed ears, large black eyes and a smile. While on his homeworld he lacked any clothing, he does appear with a straw hat, brown shorts, and Hawaiian shirt.

Retrieved from "https://aliens.fandom.com/wiki/Kosmo?oldid=181663"
Community content is available under CC-BY-SA unless otherwise noted.