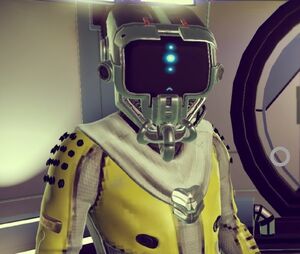 Taller than a Gek

The No Man's Sky

Sean Murray
The Korvax are a scientific race.

The Korvax often stand straight with a slight curve of their upper torso. While they're essentially robotic (although there are some fans who believe that the korvax are actually cyborgs), they do have their vertebrae exposed and curved on the back of their suit with wires connected into their buttocks. The variation of helmets indicates their job and status within Korvax Convergence, and they are always shown using a touchscreen device (Similair to tablets)

This race have a wide variety of helmets depending on their job and status within the Korvax Convergence.

The Korvax worship and venerate The Atlas, which makes contacting their priests a considerable boon for players searching for Atlas-related phenomena, ranging from Atlas technology, to Atlas Interfaces, to even locating black holes that will bring one closer to the center of the galaxies. Korvax commonly share their memories and discoveries with one another by uploading them onto special platinum cubes that are slotted into each other's brains to copy their contents. When a Korvax is dying, they will initiate the fading process, release their intellectual form into Korvax Echos, and a new entity will immediately be generated right after the old one has faded. If the casing is damaged, the shell is often recycle and crafted by another Korvax into a brand new one. For those that are afar from any other Korvax entities, the casing will be left behind and decay. The leftover is known as a Korvax Casing, which is quite valuable as a trade commodity for all of the races due to their advanced bionic nature. It is rumored that Korvax Convergence Cubes are the physical memory form of the Korvax Intellectual Form.

Korvax Prime is the home world of the Korvax race. It was a world with a "vast and precious landscape of mineral ore and power", as described on a plaque constructed by the Gek.

For many generations, the entities of the Korvax chose to naturally disconnect and become one of the Korvax Echoes, a collection of shared knowledge and experience known as the Convergence. This repository of memories of their race was housed on Korvax Prime in a neural networking hub. The metallic shell of these Korvax were then reused by newly created Korvax during an endless carapace recycle. The Korvax described this process as "an ever evolving equation that defines us."

During a galactic war between the Vy'keen and the Sentinels, the First Spawn Gek stayed in the background, allowing the two races to batter each other into submission. Once the Sentinels had been pushed to the Outer Edge of the galaxy and became silent (i.e could no longer interfere), the Gek invaded.

Hungry for the resources of this rich planet and it's colony worlds, they attacked Korvax Prime and basically destroyed it, as well as many of the inhabitants. They shredded the planet into asteroid-sized chunks and harvested the rubble, killing huge numbers of Korvax entities in the process.

Retrieved from "https://aliens.fandom.com/wiki/Korvax_(No_Man%27s_Sky)?oldid=182266"
Community content is available under CC-BY-SA unless otherwise noted.