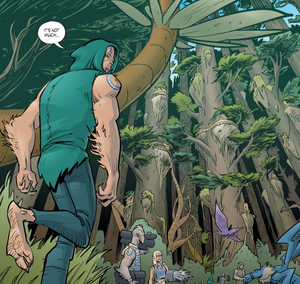 The Korvathians are an alien species from the world of Korvath.

The Korvathians are humanoids, with both male and female sexes. They are mammalian, furred beings, possessing four fingers and two clawed toes.

They appear to be tribal and somewhat nomadic, possessing pre-industrial technology. The Korvathians instill humility in their young, with a key expression being is to admit one was wrong.

The Korvathians are currently being ruled by the dictator, Lord Kragen. In opposition, a resistance has formed to fight against the warlord.

Apparently Lord Kragen was Frederick Joseph "Fred" Noonan who disappeared into Korvath years ago. He wandered the world for decades until he managed to become a warlord. When his old partner Amelia Earhart arrived, for what was seconds for her, he turned on her as he found a newspaper article of her honoring her and leaving him a footnote in history. Amelia in self-defense was forced to shot him and escape with her Korvathian allies. After fourteen cycles Lord Kragen seemed to have lost interest in enslaving the Korvathians.

Amelia and another Earth castway Daniel B. Cooper, set out on a quest to locate a portal back to Earth. They succeeded where they were greeted by armed American soldiers. Its revealed that the portal was discovered on Earth by hikers and the government managed to find a way to stabilize and sent a scout team to explore. They encountered a Korvathian native. After communication was established the Korvathian, Meyrick created an arrangement with the humans giving them an elixir that stimulates cell regeneration on humans leading to various medical breakthroughs. Additionally the government wished to acquire live alien specimens which Meyrick conceded, due to his previous experience with human from Nazi Germany that found their way to Korvath, and did not wish to oppose them as the humans threatened to send more troops, and secretly offered one of his people without their knowledge. Amelia and Cooper eventually escaped the facility with Gwenmore the Korvathian captive, but not before making sure the portal was destroyed to ensure the safety of Korvath.

Retrieved from "https://aliens.fandom.com/wiki/Korvathian?oldid=186399"
Community content is available under CC-BY-SA unless otherwise noted.