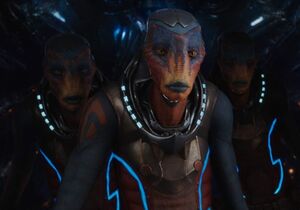 Luc Besson
The Kortan Dahüks were the first alien species to make first contact with humans on the Alpha space station during its early years in 2150.

These peaceful space faring race of aliens possess a 200 earth-year life span and stands over two meters tall. The Kortan Dahüks, despite being a peaceful race, are physically resiliant with skin as tough as Kevlar and a powerful immune system. They have a diet reminiscent of plant-life with how 80% of their diet is from photosynthesis. To nourish themselves in space, the Kortan Dahüks take special supplements they developed to prevent starvation when traveling from planet to planet

The Kortan Dahüks are known to be the galaxy's art connoisseurs and believe that art and beauty is the true pursuit of life. An example of this is how the Kortan Dahüks believe that all material beings possess a particular song called a sound sculpture that reveals their soul. The sound sculptures of the Kortan Dahüks, while beautiful, can be used to communicate long distance, heal wounds and even map space. Another example of their art and beauty based society is how their home planet Kas-ônar has the universe's most beautiful sunsets with it's three suns and how when they happen, all activity on the planet comes to a halt and every Kortan Dahük spends fifteen minutes watching the sunsets while singing their sound sculptures.

Retrieved from "https://aliens.fandom.com/wiki/Kortan_Dahük?oldid=200028"
Community content is available under CC-BY-SA unless otherwise noted.