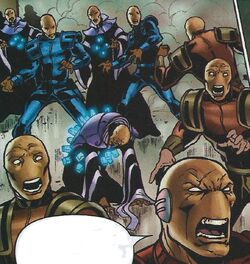 Marvel
Korbinites are a race of sentient humanoid lifeforms from the planet of Korbin.

Korbinites originally hailed from the planet of Korbin, where they had spent much of their existence creating a peaceful empire and prospering for thousands of years. It wouldn't be until Surtur and his fire demons orchestrated a disaster within the Burning Galaxy, which caused much of the Korbinite Empire to be destroyed. Though Korbin remained intact after the initial devastation, the temperatures of the galactic burning was becoming more and more lethal to their people.

In order to save their race, Korbinites created many large sentient ships capable of transporting them to potentially new worlds, however passengers would have to be placed in suspended animation mostly due to the food shortage. Each vessel would have a champion, genetically and cybernetically enhanced to protect the passengers.

They were able to escape the destruction of their world, however during the escape, the ships were not safe. Surtur's fire demons began chasing them, in an attempt to end them. The fleet ended up in a solar system, led by their flagship, protected by Beta Ray Bill and Skuttlebutt. The fleet was detected by S.H.I.E.L.D and it was Col. Nick Fury who sent the Avenger Thor to investigate.

Thor managed to board the flagship, where he encountered and engaged Beta Ray Bill in combat. Significant damage was done to the ship, causing it to crash land on Earth. In the end, Thor lost his hammer, becoming mortal and Bill was deemed worthy by Mjolnir, becoming a thunder god as a result. Odin, who had become aware of Surtur's threat, would summon Thor back to Asgard, however found Beta Ray Bill in possession of Mjolnir instead. Realizing this, a now powerless Thor was transported to Asgard. Once there, Thor regained his hammer and Bill explained his plight to the Asgardians. They agreed to assist him, asking the Dwarves of Nidavelir to forge Bill a new weapon, referred to as Stormbreaker.

Korbinites are a humanoid species, capable of reaching a maximum height of 6 ft 2 inches tall. They have 2 eyes, legs and arms. They possess orange skin, however lack any kind of nostrils, but possess 5 toes on each foot and 5 fingers on each hand. Aside from lacking nostrils, Korbinites also lack any kind of hair as well.

Champions like Beta Ray Bill are usually much taller, likely through the augmentation they undergo to protect their people. Champions can reach a height of up to 6 ft 7 inches tall, weighing in at 480 lb. Though whether or not this is confirmed for all champions is unknown, however what is known is that their physical attributes have been enhanced to the best of Korbinite science. This is performed usually through altering the DNA of volunteering Korbinites with those of their world's most powerful beasts. Following his procedure, Bill obtained a horse-like mouth and teeth. The original Korbinite home world was one of extreme heat.

Not much is known about the Korbinite culture, however what is known is that they come from a highly advanced technological society, ruled by peaceful, yet imperialist government. Their technology consist of many aspects, such of which are interstellar travel, warp-drive, genetic engineering and even the creation of artificial intelligence uploaded to starships, such as Skuttlebutt.

Retrieved from "https://aliens.fandom.com/wiki/Korbinite?oldid=178665"
Community content is available under CC-BY-SA unless otherwise noted.