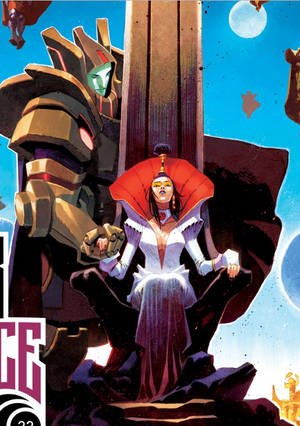 Prince Kor is the scion of the Balance Clan. He is also betrothed to Princess Pia Grant.

Son of the King of his clan, Prince Kor met Pia McKay when she appear spontaneously at the Temple of Char'oq

Together with her help they brought peace to Tanara. The two were to be wed after the ceremony of joins the three Forevermids into the Omnimid was completed.

Misfortune struck literally when Grant McKay crashed his Pillar ship into the artifact.

Unlike the rest of the gods, Kor a more forgiving of Grant as he was Pia’s father. Even after he learned the truth about Pia’s origins of not being a goddess it didn’t change his feelings for her.

Kor was the one to informed Pia of Grant’s theft of his horse to go into the Withering Woods to recover the Oxenheart from Doxta. While he was willing to lead his clan to rescue her father and fight against the invincible witch, Pia prevented him insisting Grant was her responsibility.

Unlike his parents who believed that Pia perished in the Withering Woods and wanted him to choose a new bride, Kor refused holding faith that she would return.

Kor was later reunited with Pia after she returned back to Tanara using a handheld Pillar. He and the rest of the gods took arms and traveled back with her to repel an invasion of Draylns. The gods with the aid of the surviving Legion of Ethical Champions were able to force the genocidal aliens into a retreat. Their victory was short lived when Doxta appear endearing their entire force in vines. Doxta mocked Kor of the irony that he would fall in live with a liar just as his treacherous father.

Kor is capable of flight and wields and can harness the cosmic winds into an axe that judges intentions and shatters mountains.

Retrieved from "https://aliens.fandom.com/wiki/Kor?oldid=175576"
Community content is available under CC-BY-SA unless otherwise noted.