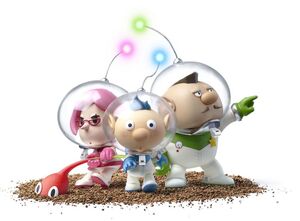 The Koppaite are the dominant species on the planet Koppai, first appearing within the third installment of the Pikmin franchise - Pikmin 3.

The Koppaites are very similar in size and appearance to that of the Hocotatians, but there're some differences to tell them apart. Koppaites seemingly have more hair than Hocotatians do, their ears more rounded than the pointed ears of Hocotatians, and their eyes are open at all times with a few rare exceptions. Koppaites are also able to breathe oxygen, but the air on PNF-404 is still dangerous to them as Koppai's atmosphere is only 7% oxygen, PNF-404 having three times as much.

Koppaites are herbivores, consuming fruit over other food sources, but in truth their bodies can only metabolize a substance they refer to as "Piktamin U", which is only found in fruit. Their brains are also unable to produce the hormone leptin - a type of hunger-appeasing hormone. This means that a Koppaite can and will continuously eat and never truly feel full .making the koppaites are frugivores meaning they can mostly eat fruit.

Their home planet was a very prosperous planet, and Koppaites had an expansive population with expansive eatables. This sort of lifestyle however was poorly-planned, and due to the poor production of food for such a lifestyle the species went into a famine in a fairly short amount of time.

As a response, numerous explorers were sent out, including Captain Charlie, to other planets to find a notable food source. After Captain Charlie's expedition onto PNF-404, the planet's civilization survived and prospered, with the species and this lifestyle was changed to avoid another food shortage in the races' future.

Retrieved from "https://aliens.fandom.com/wiki/Koppaite?oldid=172390"
Community content is available under CC-BY-SA unless otherwise noted.