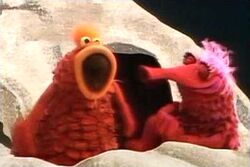 Koozebanians are smallish beings (they're about as tall as Kermit the Frog). They have two arms but no legs, and a very wide mouth. Their skin is covered in feather/scale-like structures and they have hair on their heads. They display strong sexual dimorphism: females have a long proboscis that is absent on males and babies.

The Koozebanians' mating ritual is called Galley-oh-hoop-hoop. In the ritual, male and female Koozebanians charge toward each other, howling loudly. When they collide, a large explosion takes place and the creatures seemingly disintegrate, leaving four little babies in their place.

The ritual was reported by Kermit the Frog and indiscreetly presented on The Muppet Show.

It was later revealed, however, that Koozebanians are in fact sapient. In The Muppet Show comic book, they are seen using advanced equipment to communicate with their closest galactic neighbors: the peaceful Poobs of planet Poobatron. This probably means that the male and female Koozebanians seen in the sketch were most likely crazy individuals and do not remotely represent their entire race. Alternatively their behavior is brought on by uncontrollable primal wiring; species can be observed in nature where in death plays a role in their reproduction and the Koozebanians may be no different.