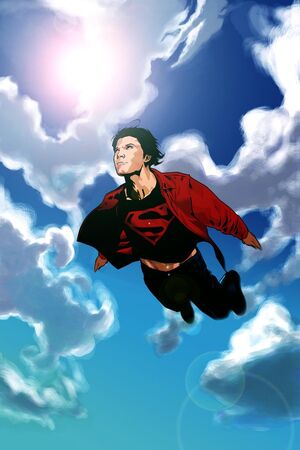 Superboy is a clone grafted with Superman's DNA (as opposed to a younger version of Superman), who was introduced in 1993. He was created by Project Cadmus to replace Superman following the Death of Superman story, and was artificially aged to mid-teens and implanted with the necessary knowledge of someone his biological age (in regards to general studies, such as math, reading, etc). Before the experiment could be completed (i.e. aging him to full adulthood and implanting him with safeguards to control him), he was freed by the Newsboy Legion and escaped. One of the boys gave him a leather jacket before he set out into the city (having his first brush with being Superman when he encounters Sidearm attempting to rip off an ATM).

Superboy is a partial genetic clone of Superman, and as such shares many of Superman's physical traits. At the time of his liberation, Superboy was physiologically 16 years old, however, chronologically he was only 16 weeks old. As a side effect of the cloning process, Superboy will never visibly age, thus looks identical in the five years since his awakening. Superboy is a Caucasian male with short black hair and blue eyes. He is noticeably taller than most people of his physiological age and is quite muscular, likely due to his partial Kryptonian genes. He is considered very handsome by most girls in his physiological age group and is typically seen with a frown on his face, rarely with a smile.

Superboy used to wear a black t-shirt (though he has worn a long sleeved shirt on occasion) with the classic S-shield in red and at times wore a brown leather jacket. He also donned dark blue fatigue pants tucked into dark-brown combat boots with a large buckled-belt.  In 2016, he wears a long sleeved variation on his traditional black with red S-shield shirt and fingerless gloves.

Retrieved from "https://aliens.fandom.com/wiki/Kon-El?oldid=176276"
Community content is available under CC-BY-SA unless otherwise noted.