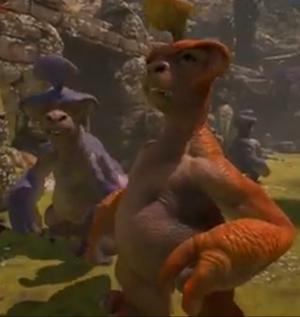 Farlands Universe
The Koleron are ape-like creatures found on the planet in Farlands.

The Koleron stand just taller than an average human being. Individuals are simian in anatomy, having long arms, short legs, and ape-like faces. Kolerons have tuffs of hair in the shape of a fan on the tops of their heads, and rounded ears that can fold over their eyes while they're sleeping.

Individuals come in three known colorations: purple, orange, and white, with purple being a more common pigment than the other two.

Kolerons are sociable creatures, living together in small groups within their ruin-like settlements. Kolerons had been shown to have a heightened amount of intelligence, capable of performing simple tasks such as drawing on the player's touch screen.

They also perform a kind of ritual, which involves one Koleron dancing while the others pose in unison during each dance. What this ritual is exactly for is unknown.

Retrieved from "https://aliens.fandom.com/wiki/Koleron?oldid=144147"
Community content is available under CC-BY-SA unless otherwise noted.