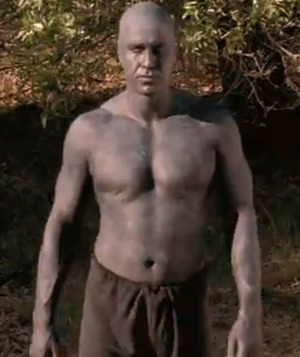 The Kobolds are a subterranean race of humanoids which live deep below the surface of the Earth.

The Kobolds dwell 50 miles (~ 80.4 km) below the Earth's surface in an area beneath the Maple White Land plateau, where the Earth's electromagnetic fields created a pocket atmosphere and artificial light for habitable conditions. They are a subterranean species, with skin as solid as metal, capable of generating heat. They possess their own language resembling growls and clicks.

Kobolds evolved to withstand the immense pressure of the Earth's core. When they come closer to the surface they must generate an electromagnetic field to keep their bodies compressed otherwise they would explode. Interaction with sudden temperatures, hot or cold, cause them to expand and contract rendering them to pieces.

According to Lionel Holt, the Kobolds possess geological sciences way ahead of 20th century humans.

Lionel Holt, a head of the geologist department at Oxford University during the 20th century, postulated that these beings existed. However his theories were ridiculed by the scientific community, forcing him into self-exile. He eventually came to the plateau where he discovered the Kobolds. After learning the Kobolds' advanced geo-dynamic sciences and their ambition to conquer the world, Lionel assisted them to have revenge on the world that spurned him. In order to devise a means for the Kobolds to safely emerge from the surface, he concocted a plan to bring his old friend Professor George Challenger, who was trapped on the plateau, to assist in building a uranium engine to create a magnetic field across the planet to safely allow the Kobolds to inhabit the surface.

Under the ruse of helping his friend for the rest of his party's safety, Challenger sabotaged the machine, causing the machine to explode, collapsing the underground world of the Kobolds.

Retrieved from "https://aliens.fandom.com/wiki/Kobold_(The_Lost_World)?oldid=161476"
Community content is available under CC-BY-SA unless otherwise noted.