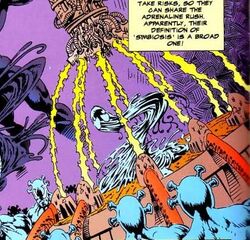 Depend on the host

Tom DeFalco
Ron Frenz
The Klyntar, better known as the Symbiotes, are a sapient species of amorphous neural parasites which must genetically bond to other organisms in order to survive and evolve.

Symbiotes are inorganic, amorphous, and multicellular symbiotic parasites formed from Knull's "Living Abyss" after he had experimented with his abilities. The Symbiotes function as living extradimensional tesseracts, requiring living hosts to anchor them to the fabric of space and time.

Symbiotes feed on organs including (but likely not limited) to brains and spleens due to requiring the chemical phenethylamine in order to stay both healthy and sane. This chemical is found abundantly in chocolate and Human brain tissue.

Because of these limited choice, the host would either be forced buy or steal large amounts of chocolate or become an unwilling cannibal that devours the brains of its kills.

Unfortunately for other species involved, with each new offspring created their species evolves, not only increasing the strengths but also reducing their sensitivity to weaknesses. In inclusion to this is that already existing Symbiotes may one day mutate and develop resistances or even immunities to weaknesses that they formerly were subject to. Luckily, however, immunity to weaknesses seems to be extremely rare.

A notable hybrid Symbiote is Anti-Venom, who was accidentally created by a combination of Venom's codex, Eddie Brock's white blood cells, and Mister Negative's mystical energies.

Symbiotes can be genetically modified into a mindless state, enabling the hosts to fully control Symbiote powers without the negative effects that can be inflicted on themselves.

In certain circumstances, however, genetic manipulation can cause a Symbiote to outgrow the needs of a host and become immune to high frequency sounds. Despite this, they still retain many of their other weaknesses.

Symbiotes share the far and in between varied ability to physically spawn their own race without need of a partner. Their species reproduce asexually, budding off suddenly into a second Symbiote when they have consumed enough "nutrition". However, a Symbiote will immediately forget its offspring since they naturally will have nothing to do with one another from that point forward.

Ordinarily, Symbiotes give birth once in their lifetime though some exceptions apply, as Venom has given birth to Carnage, Scream, Phage, Agony, Riot, and Lasher.

Unusually, Symbiotes can impregnate an offspring of another species into a female host of the same race. For example, Anne Weying gave birth to a son named Dylan after being impregnated by the Venom symbiote during her time as She-Venom. This was because the piece of Eddie Brock's codex that was left inside Anne by Venom was absorbed by the fetus that would become Dylan.

Symbiotes empower a host's natural abilities in exchange for feeding on their adrenaline to the point where they far exceed that of normal members of the host's species.

Symbiotes greatly strengthen the muscle capacity of their hosts. This allows hosts to perform amazing superhuman feats of physical strength. Normal humans are no threat to Symbiote hosts in terms of physical strength as hosts can manhandle and kill them with ease. Venom has been seen to lift cars and motorcycles with ease and toss them across long distances and even through brick walls.

Symbiotes' superhuman leg muscles allow their hosts to jump up to twenty feet in a single bound. They also enhanced the capacity of the hosts' flexibility.

Symbiotes strengthen the bones, organs, and tissues of their hosts and greatly retard their bodies' ability to produce fatigue toxins. This allows hosts to endure great physical attacks without much injury and exert themselves for prolonged periods of time without tire.

Once bonded with a host, Symbiotes physically reincorporate damaged or destroyed bodily cellular matter and rapid pace. The healing bestowed on a host ranges from easily healing minor cuts, bruises or bodily afflictions to repairing whole limbs and damaged internal organs, going so far as to regenerate hobbling injuries that are a couple of years old.

Symbiotes can easily change and morph its constituent matter in order to simulate clothing, weaponry or better protective wear. Through this, the hosts can create a slew of useful tools and lethal armaments from their own biomass, even being able to throw up a convincing physical disguise for its wearer.

Through repetitive bonding and re-bonding with multiple hosts and their unique genetic structures, Symbiotes can obtain certain allowances and exceptions by replicating the unique biophysical attributes of the host. This is dependent on whether they have any biophysical augmentations or anomalies to imprint onto the symbiote in question.

Symbiotes can absorb and store the knowledge or intuitive capacities of those they have merged with. Therefore, they become potentially immune to them due to their unique mimesis.

The constant changing of hosts before returning to an original wearer strengthens both the Symbiote and its user. The more a Symbiote changes from host to host before returning home, the stronger both they and their bond to who wears them becomes over time and practice. In order to provide this, however, the symbiote must cover its host with itself, effectively forming a full-body suit.

Symbiotes appear to extract the DNA of their hosts, and modifying their own DNA in the process. This would explain how they obtain the powers of superhuman organisms simply by attaching to them. Each Symbiote can record the genetic material of every one of their hosts in a single genetic codex.

Other powers known to be garnered from being bonded to a Symbiote include the ability for Hive Genetic and Mass-Absorption. All Symbiotes share a hive mind genetic connection between one another. Anything their enclave sees, they will know of most instantly thanks to their DNA memory interlinking them all.

While Symbiotes are incredibly powerful organisms which are nearly impossible for a host to remove without aid of any sort, they are extremely vulnerable to high frequency sounds. Anything from ringing church bells and MRI machines can agonize them enough to be removed from their host. The higher the sound, the more likely both the Symbiotes and their hosts will either be destabilized or put into a coma.

Other weaknesses include intense heat, high-voltage electricity, chemical inhibitors, magnesium, Styx's lethal touch, advanced healing factors, and an antidote formula developed by Tony Stark that was a viral organism based upon the Symbiotes created by Doctor Doom as a biological weapon.

Symbiotes can amplify the darker aspects of their hosts' qualities such as making them more aggressive, angry, and cold-hearted. Venom in particular has been known to exploit these negative emotions for his own agenda.

Symbiotes are a naturally violent species, giving way to murderous urges on a regular basis. This causes both the Symbiotes themselves and whichever hosts they may be bonded to be considered extremely deadly adversaries to contend with. This bloodlust seems to delve into the physical need as well, as the symbiotes will sometimes feed upon their hosts to sate their lust.

The Klyntar were a peaceful species that has turned aggressive during a bonding process with a host who has a mutation or mental disorder. They dislike their evil counterparts and their leader the synoptic, so they should choose their host more carefully. 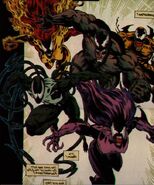 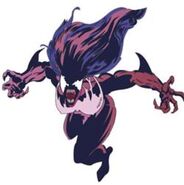