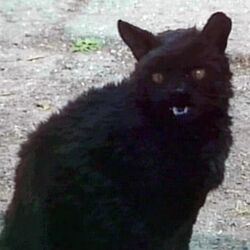 Same as an Earth cat

Bred by an extinct civilization

Doctor Who
Kitlings are a mysterious, artificially-bred species which originate from the same unnamed planet as the Cheetah People. They're known for their scavenger nature and ability to teleport to other worlds and to form mental links with their masters.

They were likely rendered extinct following the destruction of their homeworld; although it's also possible that, given their teleportation abilities, some of them might have survived.

Created by an extinct civilization which has long descended into barbarism and savagery, the Kitlings physically resemble domestic cats of Earth, but are distinguished by being scavengers and having the ability to teleport from planet to planet while searching for carrion. The Doctor has described them as "feline vultures".

Retrieved from "https://aliens.fandom.com/wiki/Kitling?oldid=176632"
Community content is available under CC-BY-SA unless otherwise noted.