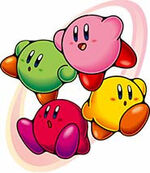 Can eat practically anything by sucking.

Kirby
Kirby's species, or Kirbies, are a sapient balloon-like race of inhabitants of the Planet Pop Star.

Most of them love lounging and are laid-back.

Kirby is a round pink Kirby and the main character of the franchise. In the games, he is native to the kingdom of Dreamland. He sucks enemies into his mouth to gain a copy ability, which allow him to fight. He protects Dreamland, Popstar, and occasionally the galaxy, from all kinds of harm.

Kirby also stars in Kirby: Right Back at Ya!, an anime that debuted in Japan and was released in America by 4kids. In the anime, he is portrayed as one of the last Star Warriors. His Warp Star crashed in Dreamland. He is supposed to defeat Nightmare from taking over the universe. The anime is considered non-canon to the video games.

Meta Knight is (presumably) a dark blue Kirby and the leader of the Meta-Knights. In the games he is a rather enigmatic character. His motives are mostly unknown until after Kirby battles him. He owns a giant warship called Battleship Halberd. In Kirby Super Star and its remake, Kirby Super Star Ultra, Meta Knight used the Halberd to try and take over Dreamland by force, ending its lazy lifestyle for good. Kirby defeated him, however. He always wears a silver mask, and he only appears without it when he is defeated and Kirby knocks it off. In the anime, Meta Knight is a Star Warrior and is a servant to King Dedede, although he criticises Dreamland's greedy dictator openly. He is a sort of mentor to Kirby, but only helps him out when he knows Kirby is outmatched. In the anime, the Halberd is used to try and defeat Nightmare.

Keeby is a yellow Kirby and Kirby's friend. He only appears in the video games, and is rather clumsy. He first appeared in Kirby's Dream Course. In two-player mode, the 2nd player automatically shows up as Keeby. Keeby was probably created because in the making of the first Kirby video game, there was an argument about whether he should be pink or yellow.

He is a shadow clone of Kirby from the Mirror World. He only appeared in Kirby and the Amazing Mirror. He never appeared in the anime. He fights Kirby at first because he's trying to protect his homeworld, but they later team up to save the Mirror World from Dark Mind.

Galacta Knight once was the best Warrior in the Galaxy, until Meta Knight defeated him. Galacta Knight was imprisoned long time ago because everybody was afraid of his power. It's unknown if he is a Kirby, but he looks similar to Meta Knight, who is one. He only appeared in the games.

Dark Meta Knight is an evil shadow clone of Meta Knight produced by Dark Mind. He fought against Kirby and Meta Knight several times. He only appeared in Kirby and the Amazing Mirror.

The Meta Knights, who are led by Sir Meta Knight, are a group of Knights who travel in Battleship Halberd. They once tried to conquer Dreamland. Two of the Meta Knights seem to be Poyo, Axe Knight and Trident Knight. However, it is unknown if they really are.

Note: Star warriors are a concept currently exclusive to the kirby anime, which is not cannon.

Prince Fluff is a Character in the Game "Kirby's Epic Yarn". He looks similar to Kirby. His home world is Patchland

Ax Knight
Add a photo to this gallery
Retrieved from "https://aliens.fandom.com/wiki/Kirby%27s_Species?oldid=183294"
Community content is available under CC-BY-SA unless otherwise noted.