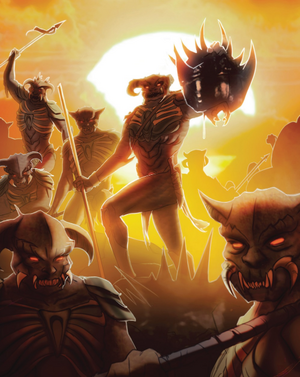 Red Dog Universe
The Kira are a bipedal demonic race native to the desert planet Kirawani.

The Kira are a red-skinned humanoids. They possess curved horns and their bodies are covered with spikes. According to the human colonists they are closely related to insects and are able to easily burrow into the hard desert rock of their world. Like most lifeforms on Kirawani, they do not require much water to survive.

The Kira have been at odds with the Wani, another race that inhabited Kirawani. When the human colonists came to their world to establish a colony to mine Imperium, the Kira relentlessly attacked the human colony in battle against the encroachment of their world by the human invaders.

For the most part the Kira are seen as a cruel race of unsophisticated savages by the trespassing humans. They are a warrior race and are skilled hunters. They possess projectile guns that shoot harpoons and are skilled cavalry riders. In addition central to their culture are the games in which they pit alien beasts against one another for entertainment.

Retrieved from "https://aliens.fandom.com/wiki/Kira_(Red_Dog)?oldid=172989"
Community content is available under CC-BY-SA unless otherwise noted.