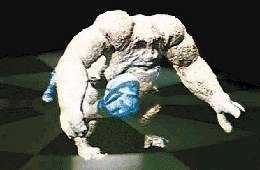 Star Wars
Kintan Striders are ferocious, semi-sapient organisms which are, as their name implies, indigenous to the planet Kintan. They are white-colored creatures whom possess large shoulders and arms that nearly drag on the ground. It is commonplace to see a Strider carrying sticks or large poles which they may use as both weapons and as a means of consuming food. Despite their prominent healing abilities, they went extinct on their homeworld. Many are used as 'guard beasts' by many Hutt gangsters.