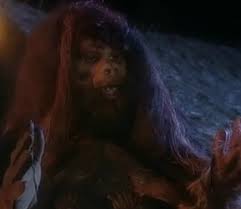 Aggressive, though less so than other GELFs

The Kinitawowi are bulky humanoids about six feet high covered in warts and shaggy dull orange/copper/brown fur similar to that of an orangutan. Kryten states some G.E.L.F.'s (though he does not detail whether this is a feature unique to the Kinitawowi) have their sphincteral orifice in their face, and as such touching of the face can be considered highly offensive to them. Their bodies are extremely tough; a direct blast of plasma from a bazookoid merely stunned a Kinitawowi at close range.

The Kinitawowi were originally bred as quartermasters aboard deep space starships. They lead a primitive tribal existence on various moons and asteroids. Their space is bordered by gigantic stone warning beacons that resembled skulls many miles across carved out of asteroids. Arnold Rimmer recalled from old space legends that unfortunate humans that unwittingly wandered into Kinitawowi space were often skinned alive to make beanbags. Nevertheless, the Kinitawowi were one of the friendlier "kintetiakh" (or tribes) of humanoid GELFs and that they didn't always kill on sight as other humanoid GELFs apparently do. Indeed, not skinning strangers alive on sight was considered a warm greeting.

Kinitawowi villages resemble African tribal villages, dimly-lit by flaming torches. The structures of these villages are simple huts or "watunga". After a successful trade, instead of a handshake, Kinitawowi custom is to hold the ankle of the other individual with one hand whilst the other does the same; and then jumping up and down on the spot.

The Red Dwarf crew first met the Kinitawowi when they were in need of supplies, especially an oxygen-generation unit. The Kinitawowi had one to trade but required Lister to marry the chieftain's daughter (played by Steven Wickham) in exchange. A disgusted Lister married the chief's daughter, but fled in the night. The furious chief (played by celebrity chef Ainsley Harriott), sent his Emohawk after the Red Dwarf crew to drain their emotions. The Kinitawowi pursued Starbug across space in a battle cruiser, in a bid to return Dave Lister to his Kinatawowi wife until the Kinitawowi battle cruiser was crippled when it crashed onto an ice planet during a chase with Starbug.

Retrieved from "https://aliens.fandom.com/wiki/Kinitawowi?oldid=180629"
Community content is available under CC-BY-SA unless otherwise noted.