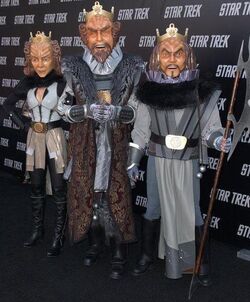 Significantly taller than an average Human

Burger King
The Kingons are a species that are shockingly similar to the Klingons; this is because they are in fact a hybridized subspecies of Klingon, created by the coupling of a king (likely Human) and a Klingon female.

Kingons are vulnerable in their testicles, which are referred to as their lower orbital asteroids. Numerous quick jabs to the belly region will also kill them.

They employ a number of tactics in order to obtain Burger King Star Trek glasses, which is done in order to collect the dilithium crystals contained within, likely because it is easy pickings for such a worthy find. It is also stated that the Vulcan salute utilized alongside the phrase "live long and prosper" was invented to counteract the Kingon's intergalactic nerve pinch.

The Kingon utilize a multitude of attacks, including but likely not limited to: