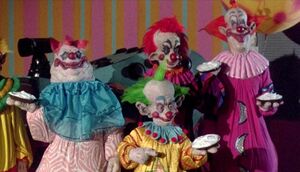 The Killer Klowns are a murderous and malicious race of alien beings, that resemble colorful circus clowns.

The Klowns use a variety of strange, comical, and futuristic tools and weapons in order to secretly harvest Humans for later consumption.

They are usually seen wielding a dangerous, but completely unassuming, weapon of their own: a gun that encases its victim into a cocoon of a cotton candy-like substance, which slowly melts the victim into a red liquid that they drink with a straw. While they prefer capturing and harvesting Humans, they also presumably catch other creatures for consumption, such as a certain Human's pet dog. Other weapons of theirs include mallets, boxing gloves, and other guns that shoot their popcorn larvae and that encase people in balloons.

At first glance, nobody takes them seriously and they can easily set themselves up in position for whatever mayhem they have planned. They walk around in a clownish manner, and have shrieking, different–pitched voices when they speak in their own language.

Their offspring appear to be self-moving popcorn larvae, which develop into long-necked creatures that attempt to bite any person nearby.

While they seem to be strong enough to withstand gunshots, their weakness is in their noses: if someone shoots a Killer Klown's nose, the Klown will spin rapidly in a green light, and explode. Also, if someone kills their leader, Jojo the Klownzilla, their spaceship will explode as well, presumably destroying them.

The Killer Klowns are monstrous, durable and practically bullet–proof with Group Affiliation, Intergalactic–ally Mobile Operations and Clown Physiology. In their psychopath antics they employ superior circus–inspired technology to effectively torture, destroy and capture their targets.

The Killer Klowns are evil psychopaths that enjoy the taste of humanoid blood and meat, as well as general carnage, mayhem, destruction and random killing in new and inventive ways.

Upon the sleepy American town of Cresent Cove, California on a Friday night, they and their large circus tent-like spaceship underneath the guise of a glowing comet-like object, happened to landed in a nearby forest and began a gruesome "harvest" of Humans throughout the town via an array of wacky yet lethal devices such as ray guns that encase people in cotton candy (which kills people in cotton candy), shadow clown-puppets, acid pies, and other, even more other bizarre weapons and gadgets. In the early part of their rampage, one Killer Klown used a Tyrannosaurus shadow puppet that swallowed a group of Humans and turned them into popcorn kernels and one of the small Killer Klowns used a cotton candy gun to trap a girl inside a cotton candy cocoon. They also kidnapped Debbie inside a balloon rather than trapping her in cotton candy or turning her into a popcorn kernel. Later on, two female Killer Klowns were seen, which explains that the male Killer Klowns are trapping Human women inside balloons to turn them into the female Killer Klowns.

The Killer Klowns live up to their name and go on a mindless rampage of death and destruction until their weakness is finally exposed: their bulbous red noses - by hitting their noses, the Klowns are killed as and thus a group of people consisting of Mike Tobacco, Debbie Stone, Officer Dave Hanson, and the Terenzi Brothers started to fight back against the murderous invaders.

However, one of the heroes, Debbie Stone, is kidnapped by the Klowns and the reason behind their attacks is revealed in a disturbing scene in which she is taken aboard their "big top" space-ship that landed in a amusement park outside Cresent Cove as its second destination and witnesses them feeding on Human blood via silly/crazy-straws.

Eventually, she is rescued by Mike and Officer Dave Hanson and a final confrontation takes place in the ship's main room called Klown Kathedral, surrounded by the Klowns, resulting in a showdown between the heroes and Klownzilla - a 20 ft tall Klown and leader of the Killer Klowns. Despite his obvious advantage, Klownzilla is defeated when police Officer Hanson uses his police badge to burst the Klown's nose - which causes Klownzilla and the Klowns' space-ship which begins to coil in and spin like a top before lifting off the ground to leave Earth, to explode. Having escaped to the authorities who had gathered outside the amusement park, Mike and Debbie briefly mourn their friends' loss until the Klown's miniature car drops out of the sky. Dave is alive and they all embrace before Paul and Rich appear from the back of the car themselves, having hidden in the ice cream coolers to avoid the explosion. Debbie then asks if it's over and pies fly down and hit them both in the face to the sound of the Klowns' laughter.

Miraculously, despite this the heroes manage to survive the explosion - it is unknown if there is an entire planet of Killer Klowns out there or if these were the only ones but it is safe to assume that these bizarre creatures will not be terrorizing Earth anytime soon following their defeat.

Retrieved from "https://aliens.fandom.com/wiki/Killer_Klown?oldid=186302"
Community content is available under CC-BY-SA unless otherwise noted.