Alien Species
Register
Don't have an account?
Sign In
Advertisement
in: Warrior Races, All Tomorrows Universe, Bipedal Species,
and 15 more 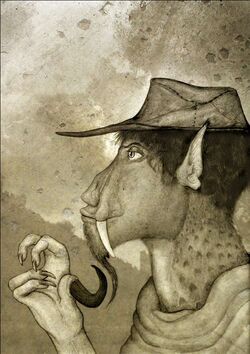 Evolved from the Human Predators

Nemo Ramjet
The Killer Folk were a posthuman species that evolved from the Human Predators.

The evolution of sapience went hand in hand with the reduction of the thumb claws and saber teeth of the Predators, which are still present, but smaller and more fragile. Regardless, the Killer Folk still had predatory urges, which showed in their religions.

In an industrial revolution, one nation-pack of Killer Folk developed factory farming, organized state structure, secularism and new technologies, and the entire population got divided into progressive factory herders and conservative hunting states. This almost led to world wars more than once, but the Killer Folk managed to survive and unite again.

With this history, the world of the Killer folk has more buried dark ages, ruined cultures and fallen kingdoms than any other world. Eventually, through radio communication, they made contact with the Satyriacs and together they founded the Second Galactic Empire, which was soon joined by the Tool Breeders.

Though they were prepared to face an alien invasion, the Empire didn't think about an invasion from other posthumans, and so the Killer Folk, along with all of their cousins, were quickly wiped out by the Gravital as part of their interstellar conquest.