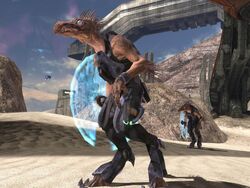 Kig-Yar, more commonly known to mankind as the Covenant Jackals are a race of sapient bipedal avians indigenous to Eayn, a moon orbiting the large gas giant Chu'ot. Physically-speaking, their appearance is thin and avianoid, and their bodies are quite frail, but they have excellent senses which is why they are often deployed as snipers. Jackals appear to be predominantly left-handed (as opposed to the other Covenant species or to Humans). Despite operating within the Covenant ranks, they are in fact mercenaries and pirates, and can be found outside of this grouping (although because of the centuries of contact with The Covenant some of them have joined The Covenant's religion and do not only fight because of money). Some Kig-Yar have actually been known to aid mankind.

Covenant Jackals excel in defensive positions, fighting from behind their distinctive energy shields. A well used shield makes a Jackal a difficult target, but the notch they use to return fire provides a weak spot that can be exploited, specifically by a sniper's weapon. Jackals sometimes abandon the shields and plasma pistols or needlers in favor of carrying long range weapons like the Covenant carbine and the needle rifle, or sniper weapons like the particle beam rifle or focus rifle, in their capacity as snipers. When these snipers are face to face with a stronger opponent, they will drop any heavy weaponry they may have and cower like a Grunt, but if given a chance will pull out a type-25 directed energy pistol and continue fighting.

Their rank is shown by the color of their shield (blue being a lower rank than orange), like with the other species within the Covenant. They are often cruel to the Grunts / Unggoys, whom they deeply despised, probably because they are both on the bottom of The Covenants caste system, although in general Jackals are considered higher ranked then Grunts. Jackals hold themselves above Grunts socially, even though they are in the same "worker" caste. They often refer to Unggoys with derogatory monikers such as "gas suckers," due to the Unggoys' need to breathe methane gas. The Grunts in turn seem to dislike the Jackals as a Grunt is heard saying "Stupid Jackal, say thank you!" after the Arbiter has destroyed the Sentinel which was attacking them. Between the years 2552 and 2553 Unggoys were known to tell the Arbiter, "If hungry, eat Jackal!".

For those seeking Jackals as opposition, it is worth noting that they can be heard and identified even before they are seen by their unique screech/yell sound. This cry is usually heard when a potential target, such as a UNSC Marine, has been spotted. The Jackals chose to side with the Prophets and Brutes in the Covenant civil war for unknown reasons, but it is speculated that it is due to their dislike of the Grunts which have sided with the Separatists.

Jackals come in two different skin colors: black/green and pale orange. The darker Jackals, called Skirmishers, are stronger and bulkier then normal Jackals, They also grow coloured feathers on their heads. Another note of difference between the two versions of Jackals is that the pale ones have pink eyes without pupils, while the Skirmishers have yellow/orange eyes with sliced pupils like cats. Skirmishers also were not known to roll or flee as often as their counterparts, making it more difficult to exploit gaps in their defenses. Most of the Jackals were witnessed to have feathery mohawks, while Skirmishers grow feathers on their heads, indicating perhaps a difference in race within the species. 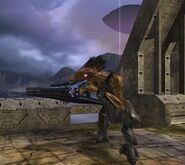