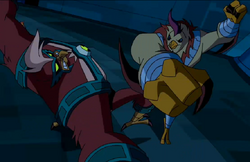 Ben 10
Kickin Hawk's Species is an unnamed race of humanoid birds from an unknown planet in the Milky Way Galaxy.

This species resembles humanoid birds and has a very wide variety in plumage. For example, Kickin Hawk resembles a hawk, Liam and the Chicken Alien resemble chickens, and the Pea King resembles a peacock.[1]

Although members can share the same plumage, they are unrelated to one another.[1]

Much like ordinary Earth birds, this species eats bird food.

This species' prominent ability is the enhanced strength of their legs, giving them incredible kicking skills.

Certain members of this species have sharp blades on their elbows.

This species can survive in the vacuum of space for a certain amount of time.

This species is weak against energy attacks, such as those of a Pugnavore.

There is a clear limit to this species' dexterity, as their fingers cannot work cell phones.

Despite their combat skills, this species can easily be defeated by a Revonnahgander with the same power level as Kundo.

This species has some kind of monarchy, as their leader is known as the the Pea King.[1]

On their homeworld, cock fighting is legal and is just called "fighting".[2]