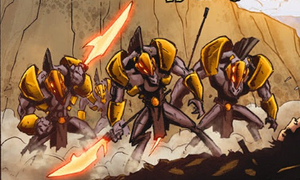 Kibrani are a ruthless equine race of conquerors and the main antagonists in the Jinnrise Universe.

The Kibrani are an equines, like Earth horses, though unlike their Terran counterparts, they walk upright on two cloven bowed legs, that supports a broad bulky torso. They possess four eyes and and a thick mane. They possess acute smell, however have poor night vision.

The Kibrani are a warlike race that adhere to the philosophy of "might makes right", they have destroyed countless civilizations and planets in the name of purifying the universe of the weak. Superficially their culture is that of a Roman-style eque, wearing armor similar to the soldiers of Earth's Roman Empire, however their war tactics could be analogous to the Mongols of Eurasia, in which they move from planet to planet destroying whatever they come across for the sake of domination and enslaving the populace to further their war machine.

Retrieved from "https://aliens.fandom.com/wiki/Kibrani?oldid=182761"
Community content is available under CC-BY-SA unless otherwise noted.