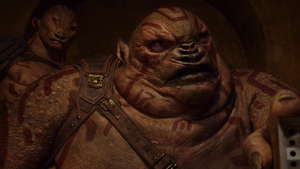 The Khodar'Khan are a sapient species of large humanoids from Karkos, a moon of planet Kirian. They inhabit a second dimension which can be visited virtually by Humans and other species. Their hands have four fingers, including an opposable thumb.

Retrieved from "https://aliens.fandom.com/wiki/Khodar%27Khan?oldid=161142"
Community content is available under CC-BY-SA unless otherwise noted.